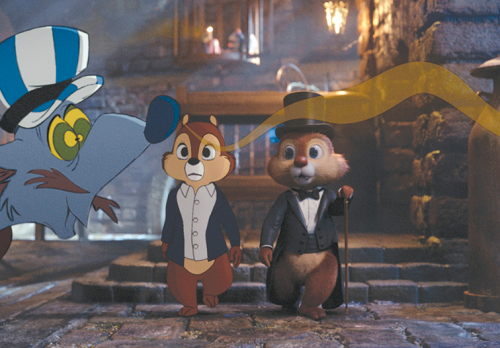 Nostalgia sells. Or at the very least, it’s an easy sell to producers. Warner Bros. attempted a couple such endeavors to mixed results. First, “Ready Player One” arrived with the directing power and budget necessary to adapt a virtual world brimming with iconic pop culture references. Then came “Space Jam: A New Legacy,” the Warner’s sad attempt to poach its own archive.

Neither of those mediocre films compares to “Chip ’n Dale: Rescue Rangers,” an unexpected, clever nostalgic journey through not merely Disney history, but across media conglomerates. This isn’t the film you’d expect considering the innocent title.

Whelp, the live-action “Rescue Rangers” reimagines Chip and Dale once more. In lieu of a straight remake or reboot, à la 2011’s “The Muppets,” this is the story of the actors who play Chip and Dale. No, not the voice actors. In this world, humans and animated anthropomorphic beings exist alongside each other, whether 2D, CGI or even stop motion.

It’s all very “Who Framed Roger Rabbit?” with a whole lotta familiar faces running around, including, well, Roger Rabbit. Dale (voiced by Andy Samberg) narrates the cast of the animated “Rescue Rangers”’ heyday until Dale took a new role that ended the show, betraying best friend Chip (John Mulaney) in the process.

Years later, Dale ekes out a living at conventions, trying to milk fan interest until the next big thing comes along. It never does. Meanwhile, Chip enjoys a bland desk job and isolated life at home with his dog. Then their former cast member Monterey Jack (Eric Bana) contacts them both. His love for cheese might’ve been endearing any Saturday morning on the Disney Channel, but he’s become a major addict in deep debt with the wrong people.

When he goes missing, Chip and Dale reluctantly team up to find their old friend and perhaps work out their personal issues. But they need help in the form of an LAPD officer (played by KiKi Layne), who helps with the case, ecstatic to work alongside the pair who inspired her to enter law enforcement in the first place.

The character synopses alone are on point. There’s Sweet Pete (Will Arnett), once Peter Pan but who turned to crime when he grew up and lost work. Next up: Captain Putty (J.K. Simmons), a claymation homage to Gumby sporting the classic anger cop-in-charge schtick. Finally, meet Bob (Seth Rogen), a CGI viking dwarf created with the same motion capture that brought to life many unsettling digital visuals in films like “A Christmas Carol” and “Beowulf.”

The film’s primary strength is how well it pokes fun at Disney and everyone else. After all, Disney turned down “Back to the Future” because of the sequence between Marty and his mom. The House of Mouse doesn’t normally enjoy being the butt of the joke. But “Chip ’n Dale” is the peculiar exception.

For that matter, other non-Disney studios seem OK with everything too. One reoccurring character goes by Ugly Sonic (Tim Robinson), a reference to the original Sonic design for the Paramount film that was hated out of existence once the first trailer dropped.

Now, all the Easter eggs might seem shameless, a bunch of red herrings distracting from a thin story. Nope. All those references, homages, winks to fans are the point. Certainly the voice acting abilities of Samberg and Mulaney, joined by a slew of other familiar faces, perform incredibly well. And director Akiva Schaffer (“Popstar,” all those Lonely Island music videos) delivers his best film to date.

But the most impressive part is how one studio is able to borrow from studios that don’t belong to the same overlords. This is a case worthy of a media studies course. Other films that attempt this level of nostalgia often fail because they can’t get the permissions necessary to bring the story to life. Somehow “Chip ’n Dale: Rescue Rangers” – yes, a film with that name – succeeds where all others fail. And it uses all those media toys quite well.