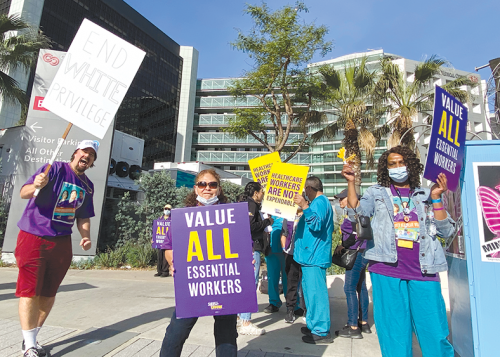 A union representing more than 2,000 employees at Cedars-Sinai Medical Center is seeking a pay increase for its members. (photo by Edwin Folven)

Health care workers at Cedars-Sinai Medical Center followed through on their threat to strike on May 9, and representatives of their union said the strike will continue through May 13 unless a deal is reached.

Members of Service Employees International Union-United Healthcare Workers West are asking for pay increases and better working conditions after the hospital system was fined almost $100,000 by the California Division of Occupational Safety and Health last year.

Cedars-Sinai officials said the strike has not impacted the hospital system’s patient care, and that supplemental staff has been hired to maintain operations. In a statement, Cedars-Sinai president and CEO Tom Priselac said the union represents 14% of the hospital’s workers.

“For nearly two months, Cedars-Sinai Medical Center has negotiated in good faith with representatives of SEIU-UHW to reach a fair and mutually-beneficial agreement for employees represented by the union,” he said. “We had hoped to avoid a strike with contract offers that would continue to reward our represented employees with market-leading pay – including substantial pay increases – for their hard work, excellent performance and dedication to the community.”

While on the strike line on May 10, Oglesby said union representatives and Cedars-Sinai officials were working to find a resolution. Although no agreement was reached, the two sides were expected to meet again on May 11.

Priselac said Cedars-Sinai offered SEIU-UHW employees average wage increases of 16% over the next three years. Oglesby said the offer was closer to 2.75%.

“If they were giving us 16%, then we would not be here marching,” she said.

Oglesby said Cedars-Sinai could not have survived the pandemic without its “health care heroes,” and that the hospital was negligent in its handling of internal COVID-19 issues, as evidenced by the Cal/OSHA violations.

According to the union, the hospital system did not immediately report several cases of serious illnesses, including those sustained by an environmental services technician, a certified nursing assistant and a security officer who were all hospitalized and later died.

In addition, SEIU-UHW alleges that Cedars-Sinai failed to maintain an “adequate” aerosol transmissible disease exposure control plan, which is a “standard designed to protect employees who are at increased risk of contracting certain airborne infections.”

The union also maintained that Cedars-Sinai failed to provide required aerosol transmissible pathogens training to auxiliary staff and did not use “feasible engineering and work practice controls” to reduce COVID-19 exposure to some staff members.

“Since our founding in 1902, Cedars-Sinai has earned national recognition for safety and for providing the highest quality patient care,” Priselac said. “Cedars-Sinai has consistently earned five stars from the Centers for Medicare and Medicaid Services – the highest rating from the federal government and an honor earned by just 14% of U.S. hospitals surveyed. The medical center is one of the top 10 hospitals in the nation, consistently earning a spot on the honor roll of the U.S. News and World Report’s ‘Best Hospitals.’”

He said Cedars-Sinai recognizes the “overwhelming stress and pressure” that the pandemic put on its staff and “immediately took steps to preserve a safe and rewarding workplace.”

“We used the same universal precautions and safeguards, consistent with federal and state guidelines, to protect all employees who enter patient areas,” Priselac added. “We also provided the same level of access to personal protective equipment to all employees, regardless of the job they performed.”

Although both sides are disappointed in the negotiations thus far, SEIU-UHW representatives said they have “made movement” on their wage proposal, and that their proposal has “moved closer” to what Cedars officials have offered.

Oglesby said she doesn’t know what the union will do if an agreement is not reached by May 13.

“We’re going back to the bargaining table, and [hopefully] we can come up with some kind of solution for this,” she said.

Structures in Plummer Park should be preserved