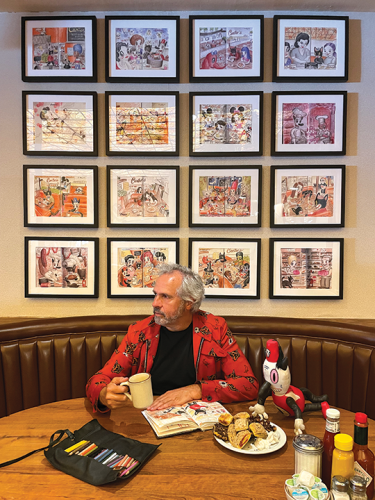 Gary Baseman sits in the booth that now displays much of his artwork at Canter’s Deli. (photo courtesy of Gary Baseman)

Gary Baseman is known to audiences the world-over for his contributions to the artistic world, be it his illustrations for publications like “Rolling Stone” and “The New York Times,” his design of the popular board game Cranium or the animation he did for tv series like “Teacher’s Pet.” Over the years, his work has earned him Emmy and BAFTA awards. Now his sketches can be viewed at a special booth in Canter’s, the iconic Jewish deli on Fairfax Avenue that Baseman has long-considered to be a fount of inspiration for his visions.

A Los Angeles native, Baseman was the son of Holocaust survivors, and he grew up in the Fairfax District.

“My mother Naomi worked [at Canter’s] for 35 years,” Baseman said. “She was the head bakery sales lady from about 1965 to 2000. It holds a special place in my heart because it was part of my daily life. I ate the challah every day growing up. Every morning, my father dropped my mom off or picked up my mom from work. If he couldn’t do it, sometimes I would. When I moved to NYC to begin my art career in the 1980s, I would have my parents FedEx cheese Danishes to me in Brooklyn. When I started a Kickstarter to raise funds for my documentary on my parents, I had the event in the Kibbutz Room with Moby DJ-ing. Fairfax was a special place to grow up in.”

Baseman said that he always carries a sketchbook, drawing almost every day and everywhere he goes. For many years, he has worked on sketches while eating at Canter’s. Gina Canter, a fourth-generation member of the Canter family and the great-granddaughter of restaurant founder Ben Canter, reached out to Baseman about including his art in the dining space. Baseman described Gina Canter as “the next generation,” pointing out that he had gone to Fairfax High School with her father Marc Canter and his siblings Jackie and Gary.

“I’ve been following Gary and his drawings on Instagram for years,” Gina Canter said. “I finally asked [him] to grab breakfast and explored the idea of highlighting each of his drawings that was dedicated to Canter’s specifically. He has many, but we sat down together and picked our favorite 16 which are now displayed in a 4-by-4 grid. They are all unique and different. You might recognize your favorite waitresses in one of them or our iconic ceiling.”

Baseman said the drawings are taken from decades of drawing within the restaurant.

“I’m working in sketchbook No. 154 now, so while the drawings [in] Canter’s is over a 10-year period from 2011 to 2021, I have drawings of Canter’s from decades ago. I love the challenge of drawing while I dine. I especially love that every drawing hanging tells a unique story. Of all the 16 drawings, all but one captures the environment of Canter’s. I usually draw what I see while I am eating and keeping up a conversation with friends or family. Some of the drawings are even my reinterpreted images of vintage Canter’s art.”

One drawing, in particular, holds personal meaning for Baseman.

“The day after my mother passed away, I came to [Canter’s for] breakfast with my two oldest friends, lost and numb. I hungered to go somewhere to feel her presence. I always kid that my claim to fame is my mom, since she worked in Canter’s bakery. As I sat there, I just imagined my mom leaving this Earth. But not as the woman I knew who was always older. She had me later in life and my folks always felt like grandparents. A few hours before she died, I was going through the family photo albums and found a photo I had never seen before, even though I had looked through these books hundreds of times. I found a photo of her as a 15-year-old girl. She looked so young, beautiful and alive. I loved to sit with my parents and show them old family photos. A few hours after I saw this photo, she took her last breath,” Baseman recalled.

“So when I sat dining at Canter’s, I drew my mom as a young girl being lifted to heaven by my little ChouChou creatures manifested as angels. When I was leaving Canter’s, I used the Canter’s parking stamp on the drawing to complete it, to document where I drew it.”

This is the first time that Canter’s has highlighted a specific artist or patron in this way.

“I come from an art background,” Gina Canter said. “I have a B.A. in Fine Art so this was a very fitting project for me but also a way to help bring people into the restaurant. The pandemic hasn’t been easy for Canter’s. Gary’s drawings bring smiles to people’s faces. It’s like our own miniature art exhibit.”

She also pointed out how the display is entirely locally-produced.

“This was a very L.A. project. Each element was done all locally within a one-mile district. All the printing was done at Samy’s Camera on Fairfax and all the framing at Allan Jeffries Framing, which is also in the neighborhood and has been around for almost 40 years. It felt right working with these places, all things L.A.,” Canter said.

Baseman said that he draws inspiration from the walls of Canter’s, which holds a unique place in Los Angeles history.

“[It] represents the history of the Fairfax District, where I was born and bred. It hasn’t changed, casual and funky and feels like home. You can feel in the atmosphere, all who have dined in the past 70 or so years… all the Holocaust survivors, rubbing shoulders with all the rock ‘n rollers, mixed with all the Hollywood kids and vampires. I still love the people and ambiance here. This is where I get my fix of matzo ball soup, potato knish with gravy, and always go home with my favorite chocolate rugelach,” Baseman said.