Boulevard to sparkle with new lighting 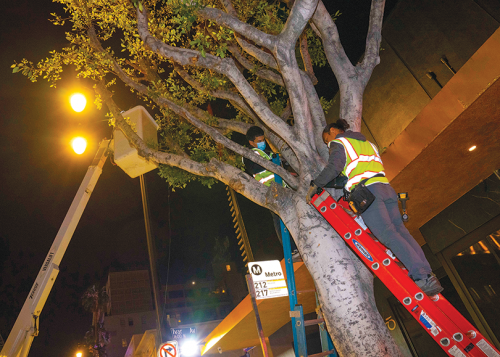 Crews are installing the new lights that will be illuminated on June 1. (photo courtesy of the Hollywood Partnership)

A new lighting program will debut in Hollywood on June 1 that city officials said will dazzle residents and visitors. The lights will be installed on the bases of trees along Hollywood Boulevard from McCadden Place to Vine Street and will first be illuminated in rainbow colors in celebration of Pride Month in June.

“The illumination of the world famous Hollywood Boulevard is just in time for the exciting return of the L.A. Pride Parade to Hollywood, where it originated 52 years ago,” said Los Angeles City Council President Pro Tempore Mitch O’Farrell, 13th District. “This project is also a complement to our focus on making the boulevard safer and more enjoyable for residents and tourists, including the centerpiece of my ongoing ‘Heart of Hollywood’ initiative, the Hollywood Walk of Fame Master Plan. I am proud to have identified the funding to make this project possible and I commend the Hollywood Partnership and our Bureau of Street Lighting for their amazing work on this huge accomplishment.”

The lights will illuminate a half-mile stretch of the boulevard. The initiative is part of a joint effort by the Hollywood Partnership, a nonprofit that manages areas within the Hollywood Entertainment District. O’Farrell’s spokesman Dan Halden said the new lights will be “transformative” and will be a new attraction in that part of the boulevard.

For the first time in nearly four decades, the Pride Parade will take place in Hollywood, where it was first held in June 1970. Christopher Street West is holding the parade beginning at 10:30 a.m. on June 12. The parade will start at Hollywood and Cahuenga boulevard, head west to Highland Avenue, south on Highland to Sunset Boulevard, and east on Sunset to Cahuenga Boulevard.

The lighting project, which is the inaugural effort for the Hollywood Partnership under its new CEO Kathleen Rawson, includes the installation of state-of-the-art light fixtures that will illuminate 111 tree canopies. Each light can project any color and will be used to celebrate different holidays and causes.

“The enhanced lighting along Hollywood Boulevard will positively impact the neighborhood for years to come,” Rawson said. “This project will not only make our streets brighter and safer, it will also spark a greater sense of place and community. This project is one of many that we hope to implement in support of the Hollywood Partnership’s strategic place enhancement goal to reinvigorate the public realm through the creation of positive and memorable experiences throughout the district.”

“It’ll bring sparkle to the center of the boulevard, which is something that the Hollywood Walk of Fame and master plan calls out, and that businesses and my office have been clamoring for years,” O’Farrell added. ‘We’re delighted. It is truly a partnership.”