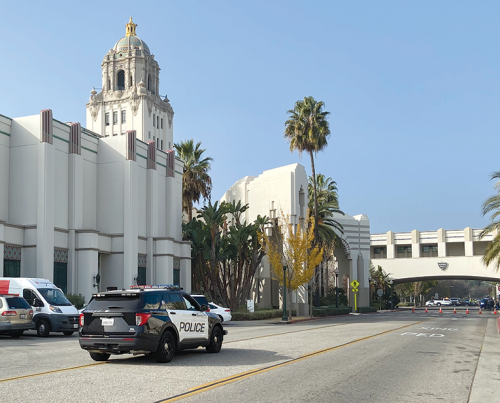 The Beverly Hills City Council will discuss the proposal again on May 24. (photo by Edwin Folven)

In an effort to attract additional highly qualified and trained personnel, the city of Beverly Hills is considering offering police officers a 14% pay increase over the next three years.

At the request of Mayor Lili Bosse, the City Council on May 10 discussed potential pay increases for sworn police officers who are members of the Police Officers Association and the Police Management Association.

According to a staff report, Beverly Hills Police Department officers currently earn 10% less than Beverly Hills Fire Department firefighters. Although no final decision was made, the council is scheduled to discuss the possible pay increase again on May 24.

“As far as I’m concerned, this is an urgent matter, and I’m looking forward to further discussion and to hear from the community – and hear further from the POA,” Bosse said.

The council has been looking to bolster its police department for months, and that effort was punctuated during Bosse’s inauguration on April 5, when she announced several public safety measures the city would be undertaking, such as the creation of a real-time watch center to monitor the city’s security cameras.

At the time, she said the BHPD had hired five new officers and 16 more were in the application process. However, the council and the department are hopeful that a pay increase will help recruitment efforts.

“It will make the city and the department more competitive in the recruiting marketplace,” BHPD Chief Mark Stainbrook said. “[It is] difficult to recruit officers at this time – especially highly qualified officers.”

The staff report states that the city’s memoranda of understanding with the POA and PMA will end on April 7, 2023. The last pay increase officers received was in October 2021, when the city agreed to a 2% pay increase, according to the report.

City staff said Beverly Hills ranks third among 14 Southern California police departments as far as base salary. According to the staff report, Orange County and the city of Santa Monica rank first and second, respectively.

Councilman Robert Wunderlich said the current hiring climate for police officers is “very difficult,” and that he generally supported moving forward with the proposal to make the department more “attractive” for potential hires.

“Broadly, within law enforcement, we’ve seen our candidate pool dwindle [over] the years, and that’s probably for many, many different reasons,” the chief said.

Stainbrook added that the department’s goal is to have 150 officers on its payroll. Despite its recruitment efforts, the BHPD is still short approximately 14 officers, he said.

“We’re competing against all these other departments,” Stainbrook said. “Our number of qualified candidates is lower, and getting everyone through the process takes quite a long time as well.”

Councilman Lester Friedman said residents have asked him why the city continues to contract with private security companies when it should be hiring more sworn police officers. Stainbrook said the companies complement the BHPD’s operations.

“The private security companies give us that multiplier effect,” Stainbrook added.

Council candidate Darian Bojeaux submitted a written comment in which she criticized the staff report for not including BHPD officers’ current base salaries, which start at more than $88,000. Councilman John Mirisch said that information is accessible to the public, but he asked city staff to ensure that those figures are easy to find.

“The whole point is to solicit feedback,” Mirisch added.

“I just think this is the right thing to do,” he said.