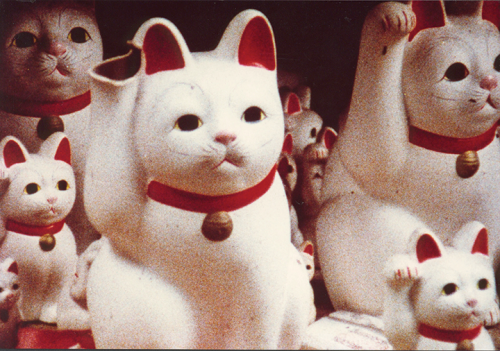 “Sans Soleil” will be shown on May 19 in the Ted Mann Theater. (photo courtesy of the Academy Museum)

French filmmaker Chris Marker is being honored by the Academy Museum with a retrospective of his work entitled “The Path of the Cat: Chris Marker’s Centennial.”

Known for blending fiction and documentaries and exploring time and space, Marker continued to inspire filmmakers since his passing in 2012.

Born in 1921, he creatively reworked his life as if editing one of his own films. Marker was famously represented by images of his cat in place of his own image and rarely gave interviews. The name Chris Marker itself is a pseudonym, his real name being Christian François Bouche-Villeneuve. This seeming retreat was not one from the world, as his films remained deeply connected to politics and people.

The retrospective celebrates the recent centennial of the filmmaker, writer, journalist, photographer, philosopher and lover of cats. In the 1950s and 1960s, his work was marked by the essay form, as he traveled to China, Siberia and Cuba. In 1962, he came to international attention with his sci-fi short, “La Jetée,” made while he was filming the sprawling documentary about contemporary French society, “The Lovely Month of May.” In this decade, deeply influenced by the anti-Vietnam War movement and the revolutionary spirit of May 1968, Marker was actively involved with SLON, a filmmaking collective dedicated to activist production. He reemerged to make films under his own name in the 1970s and 1980s, and became interested in digital technology in the 1990s and 2000s.

Abundantly prolific and never wedded to one medium or style, Marker may have disliked the idea of a retrospective, being someone who resisted the spotlight and linearity. But his films, so filled with formal innovations, philosophical depth and curiosity, remain endlessly engaging. This series highlights some of Marker’s beloved works, as an invitation to always choose the path less traveled.

The retrospective runs with various screenings through May 26. For information and tickets visit academymuseum.org/en/series/the-path-of-the-cat-chris-markers-centennial.

The Academy Museum is located at 6067 Wilshire Blvd.  For information, visit academymuseum.org.

‘The Italian in Me’