What ‘Halo’ indirectly teaches us about adaptations 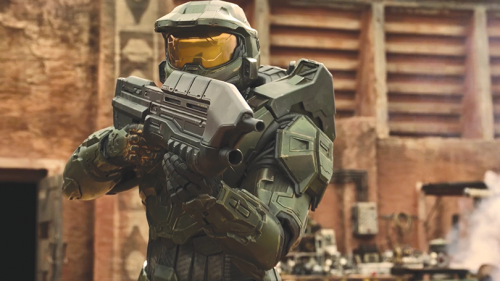 Video game adaptations deserve better, and the story of “Halo,” set in a dystopian future in which one enchanted Spartan soldier must confront an alien force known as the Covenant Empire, exemplifies the many problems. It ain’t good, but many creators spent a long time to deliver something this bland.

What began as a first-person shoot in 2001 now spans more than a dozen games and north of $3 billion in profits. Of course the prospect of an adaptation lingered for years. At one point, Peter Jackson would produce with newcomer Neill Blomkamp at the helm.

That didn’t pan out, and Blomkamp created best picture nom “District 9” instead. And so “Halo’s” long limbo continued with ample rumors about Microsoft, Xbox’s overlords, deemed difficult to negotiate with. Other big names arrived and vanished. During the interim, a few direct-to-video quality films sporadically appeared on various streaming platforms, including at least an animated anthology film with some merit.

Finally, Showtime would play host to the Master Chief. Oh wait, Showtime produced the series, but it would land on Paramount+. For almost two decades, diehard fans waited for something this dull to arrive.

With more than a third of the season complete, nothing incredible graces the screen. Master Chief (Pablo Schreiber) arrives alongside his unit of Spartan soldiers to defeat Covenant forces decimating an isolated human colony. But this crew and their bosses at the United Nations Space Command don’t much care about marginalized folks across the galaxy.

They’re more interested in ancient relics that caught their foe’s eye. Upon contact, one particular piece sparks Chief to remember a life prior to brainwashing and emotional suppressants running through his body. His creator Dr. Halsey (Natascha McElhone) sees this as both a problem and a curious solution to various ethical restraints placed on her.

Along for the galactic ride is series original character Kwan Ha Boo (Yerin Ha), witness to horrible atrocities and thorn in the UNSC. As for the aliens themselves, they need those artifacts and have a special weapon to aid them in this goal, human collaborator Makee (Charlie Murphy), rocking some truly ridiculous attire during her tenure next to the long-necked, creepy Covenant leaders.

Perhaps this summary sounds enticing, but it all plays out like a menu of moving cliches. A military force without concern for the working class as an appetizer. Modified soldier finding emotion as the main course. And you know what doesn’t occur much? Action. Does a “Halo” series need to go full first-person mode like 2005’s “Doom” in a sequence clever but painful in a such a bad flick?

It gets worse. Each episode costs around $10 million to make, and the team went through 265 scripts. What did the others look like? At present, the series is riding a false high. The pilot became the most viewed series on Paramount+, per the streamer’s vague announcement. As for the next installments, ratio silence.

The issue is one of fidelity to the source. Master Chief’s face is revealed in the first episode, something kept a tight secret across consoles. (That’s likely the result of series like “The Mandalorian” and “The Book of Boba Fett” which unmask both their elusive leads.)

Sure, that matters for some, but not wide audiences. If current showrunner Steven Kane and his team wished to make revisions, that’s their prerogative, but Kane seems to be approaching things in a divisive way.

“We didn’t look at the game,” he told Variety. “We didn’t talk about the game. We talked about the characters and the world. So I never felt limited by it being a game.”

This claim attempts to pit allegedly lowbrow video games against his notion of pure storytelling, though Kane does admit to poring over the entire “Halo” lore. But if any of the creators bothered to play those games, they might’ve noticed some rather incredible things.

While gamers spend most of their time seeing the digital landscape from Master Chief’s perspective, a host of cinematics, various movie sequences that move the story forward, sport some incredible visuals worth emulating, or at least taking note of.

Thus far, revisions don’t result in a better story, which would likely be met with more forgiveness from the fandom. Instead, an action-packed game plays out like a limp, quite slow sci-fi drama without much personality.