Water line project on Rossmore to cause traffic delays 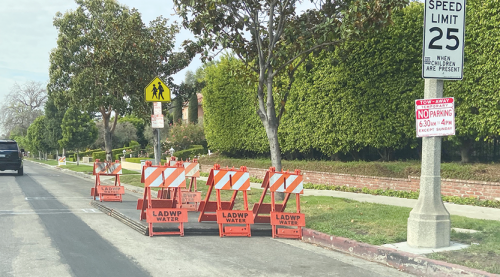 Crews will be replacing a main water line on Rossmore Avenue between Melrose Avenue and Third Street. (photo by Edwin Folven)

The Los Angeles Department of Water and Power has started the Rossmore Mainline Project, a major water line replacement expected to affect traffic on Rossmore Avenue between Melrose Avenue and Third Street through October.

LADWP spokeswoman Sylvia Beltran said the project is part of the utility’s effort to upgrade aging underground infrastructure throug-hout the city. A 6-inch cast iron pipe dating to the 1920s will be removed and replaced in sections.

Crews began work on April 8 in front of Marlborough School so that section could be completed during spring break. Beltran said work this week included paving at the intersection of Rossmore Avenue and Third Street, as well as pavement cutting on Muirfield Road.

Crews are not expected to work on the Rossmore Mainline Project for the next two weeks, Beltran said, but will begin pipe replacement in the 100-200 blocks of Muirfield Road on May 9. The LADWP has requested the relaxation of parking regulations during the work. Muirfield Road, which parallels Rossmore Avenue to the west before turning east and intersecting with Rossmore north of Third Street, will be closed to through traffic. Flaggers will assist residents entering and exiting driveways.

Signs reading “resident only access” will be placed on Third Street at Muirfield Road. At the end of each work day, the street will be reopened to through traffic.

The construction will occur from 8 a.m.-6:30 p.m., Monday through Friday, with some weekend work necessary. Throughout the project, one lane of traffic will remain open on Rossmore Avenue. Street parking will be restricted during work hours but driveways will remain accessible.

Beltran said efforts will be made to finish the work early, but the project is currently scheduled to run through October. Motorists traveling through the area are advised to plan ahead. The LADWP will provide regular updates about the Rossmore Mainline Project. For information, email sylvia.beltran@ladwp.com, or visit ladwp.com/metroprojects.