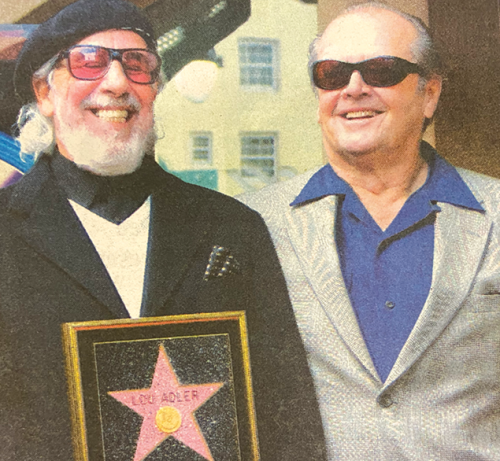 Legendary music producer Lou Adler, accompanied by his friend Jack Nicholson, received a star on the Hollywood Walk of Fame in this photograph in the April 13, 2006, issue of the Beverly Press and Park Labrea News. Adler received a star in the recording category at 6901 Hollywood Blvd. He helped create the Monterey International Pop Festival and produced music by Jan & Dean, Sam Cooke, The Mamas & the Papas, Johnny Rivers, Barry McGuire, Scott McKenzie, The Grass Roots, Spirit and Carole King. At the time, Adler and Nicholson frequently sat courtside together at Los Angeles Lakers Games. The Hollywood Chamber of Commerce has been adding many stars to the Walk of Fame lately including actor Bob Odenkirk, who was honored on April 18 at 1725 Vine Street. Actress Jean Smart will receive a star at 6150 Hollywood Blvd. at 11:30 a.m. on April 25.