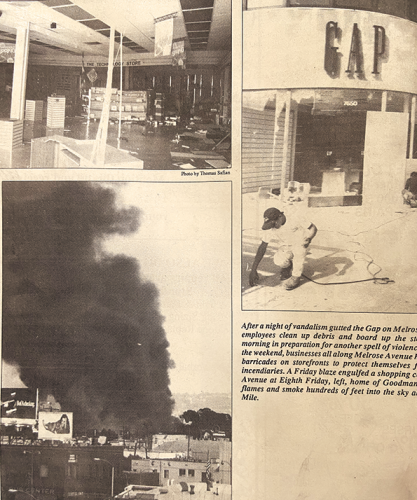 Photographs in the May 7, 1992, issue of the Park Labrea News showed some of the aftermath of the Los Angeles Riots, when civil unrest spread throughout the city from April 19-May 4, 1992.

The civil unrest followed the acquittal of police officers involved in the beating of motorist Rodney G. King. Demonstrations, fires and looting occurred in the Hollywood, Wilshire, Beverly, Fairfax and Melrose areas, and many businesses were damaged or destroyed.

The photographs show a Radio Shack store on La Brea Avenue that was looted, workers cleaning up outside at a GAP store on Melrose Avenue and smoke coming from a fire that destroyed Goodman Music on La Brea Avenue.

‘The Fire This Time’ to screen April 29