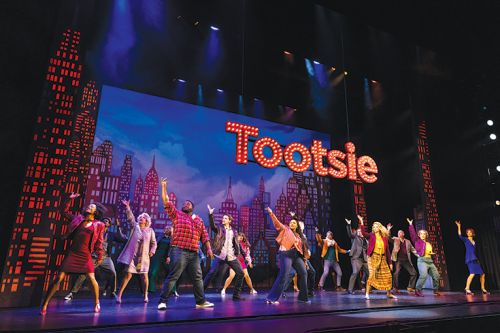 The national tour of the musical “Tootsie” will be hitting the Dolby Theater stage starting April 26 for a three-week engagement. (photo by Evan Zimmerman)

Broadway in Hollywood is pleased to announce that “Tootsie,” featuring a Tony Award-winning book by Robert Horn and a score by 2018 Tony-winner David Yazbek, will celebrate its L.A. premiere in Hollywood at the Dolby Theatre from April 26 to May 15.

“I worked painfully hard to make it incredibly funny, hopefully touching at times, and to invite the audience to be a part of the humor, not just observers of it,” Horn said. “No book of a musical exists without a score, and David Yazbek and I worked together to create this. I think the secret to a successful book is how seamlessly it can work with the score that it feels like one person wrote it all. He and I laughed for three years non-stop creating this show, and I think that joy and left-of-center humor has its handprint throughout what you see onstage.”

“When I watch audiences watch the show and hear that tsunami of communal laughter that just builds and builds throughout the night and lifts the ceiling, I wish I could let audiences know that writing the show was that exact same experience. David is insane in the most glorious way, and my absolute love of collaborating with him is a huge part of what makes the show so joyous,” he added.

Start with the soup, stay for the ambiance Mr. C in Beverly Hills