‘The Batman’ is pure emo, as it should be 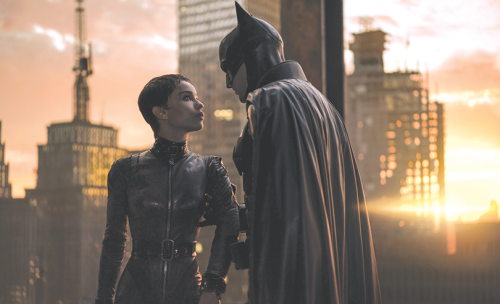 Since his live action debut, Batman has undergone various transformations from camp to gritty realism. But the key to a good Bat film is Nirvana. A voiceover narration invokes a rich film noir history as the latest Dark Knight (Robert Pattinson) reflects on the soul of Gotham City, while Kurt Cobain’s low, creaking voice sings, “Underneath the bridge tarp has sprung a leak.”

In emo’s golden age, grunge rock always served as a primary source of inspiration (the Sub Pop Records connection between Nirvana and emo elders Sunny Day Real Estate sure helped). So Pattinson’s now-dubbed emo Batman – thanks to some excessive brooding and black makeup around the eyes to ensure the eyes alone escape his cowl – fittingly remembers where it all began: somber ballads.

Following a decade of mediocre Batman moviemaking (for a Snyder defense or lamenting Batman fatigue, look elsewhere), “The Batman” plays like a slow song that gradually crescendos into a full-blown screamo anthem over three hours. And it’s never dull or repetitive despite its atmospheric dedication.

“The Batman” covers a lot of ground as Bats tracks new serial killer the Riddler’s (Paul Dano) murders. With each dead body, clues reveal a dark secret that spans law enforcement, local government and even organized crime. Bats might even need to face his own past and personal demons, with the help of some Cobain, of course.

For the uninitiated, Batman arrived as part of the Detective Comics series, deemed “the world’s greatest detective” in the 1940s, but only a couple scenes across a dozen films wink to that aspect of the characters. “The Batman” corrects this, replacing an action premise with a buddy detective story with Batman working alongside Officer Jim Gordon (Jeffrey Wright) despite the police force’s misgivings about informally deputizing a vigilante.

Like a true detective story, Batman must pore through evidence, conduct research and question various unsavory figures like Oz, aka the Penguin (Colin Farrell sporting some incredible makeup to fit the part), and crime boss Carmine Falcone (John Turtorro). It’s easily the most complex superhero film ever made, which makes the time fly by.

Now what’s more emo than a love story, and not a happy one. How can a dude canvassing a city in a cape and bullet-proof armor ever hope to settle down? Certainly, his trusted butler Alfred (Andy Serkis) might love for him to find safer hobbies, become the public face of the mighty Wayne family 20 years after his parents’ murder.

Robert Pattinson may be the most compelling Batman yet in the latest film about the iconic character. (photo courtesy of Warner Bros. Pictures)

But most Batman stories dwell in darkness. In the past, filmmakers tried to have it both ways, give Bruce Wayne a love interest and a glimmer of hope. This time, any specks of happily ever after come with a whole lotta baggage. To start, this Bruce spends most of the film in costume. To call him Bruce seems disingenuous. That doesn’t help any relationship bloom.

Still, this is the most arousing Bat film to date. None, absolutely none, of the previous films concerned themselves with sexual chemistry, but Batman and Selina Kyle (Zoë Kravitz), perhaps deemed Catwoman in a future installment, work some movie magic.

Charms of previous Batmen were wasted. Apparently all it takes is a once-tween vampire channeling social stunted behavior paired with a talented cat thief in search of her missing friend. And the outcome is electric. Not even Bruce’s poor-fitting suit during a funeral ceremony or bad hair can stop this Batman and Catwoman, though that hair emits big emo energy.

Frankly, the only notable imperfection is that hair, though there is one green-screen shot of the Caped Crusader as he descends a building via squirrel wingsuit. Forgive them. “Wonder Woman 1984” did much worse. Otherwise, it’s a perfect film with incredible cinematography, incredible performances from all parties involved and a haunting non-emo score by Oscar-winner Michael Giacchino (“Up,” “Lost”).

This is the opposite of a Marvel film by far: eerie blasted at 11, so dark any house lights hinder viewing. It begs for an R rating that Warner Bros. likely rejected. That’s to the film’s credit. This one dances around horror and outright gratuity, but the vibe is entirely more mature than “The Dark Knight’s” most brutal moments.

All praise belongs to the biggest emo kid of ‘em all: director and co-writer Matt Reeves. How else do you go from directing “Pallbearer” and writing for “Felicity” to helming “Cloverfield,” crazy vamp flick “Let Me In” and a couple “Ape” epics?

He knows his way around pop content as well as stories that explore the emotional core, coming to an unprecedented climax with “The Batman,” a visual, narrative, aesthetic delight worth experiencing often and frequently. Now that’s emo.

Start with the soup, stay for the ambiance Mr. C in Beverly Hills