Tears and music for Ukraine 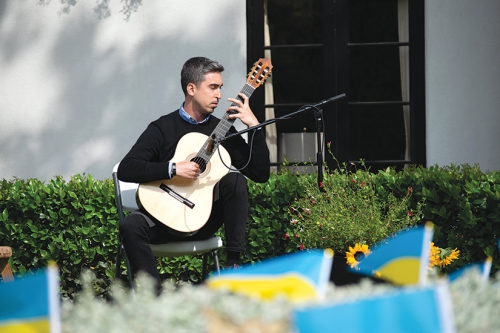 Grygorii Koval, a classical guitarist from Ukraine, played a benefit concert at a Windsor Square home on Sunday, organized by homeowners Kim and Erwin McManus. (photo by Miranda Lopez)

“What’s more opposite to music?,” Ukrainian President Volodymyr Zelensky asked the Grammy audience Sunday evening in a prerecorded video. He answered his own question.

“The silence of ruined cities and killed people. Our musicians wear body armor instead of tuxedos. They sing to the wounded in hospi­tals – even to those who can’t hear them. But the music will break through anyway.”

Hours earlier, on the front lawn of a home at Second Street and Lorraine Boulevard in Windsor Square, a lone Ukrainian classical guitarist was playing his heart out, his own music breaking through to a group of 50 people with the goal of sending donated money back to the musical school he once attended in the city of Vinnytsia, about 160 miles southwest of the capital Kyiv.

For Grygorii Koval, a student at USC who will soon receive a doc­tor of musical arts degree, it was time to give back to his alma mater, the Vinnytsia College of Culture and Arts, his mentor, professor Sergii Selesnov and his nine remaining students.

“Professor Selesnov was always interested in what was happening in my life,” Koval said. “Now I want to be the one interested in his life, and I want to support him and his guitar class in this brutal war.”

When the war erupted, Koval was so depressed he took a drive up to Big Bear to try and clear his head and figure out what he could do. He called professor Selesnov and learned how his students were suf­fering, how everyone, from farmers to students to housewives were doing whatever they could do to support their people.

“I had some ideas, but I felt so helpless,” said Koval, who is a member of Guitar Salon International. “I just knew I needed to do something. But what?”

The “what” came about by hap­penstance. A few weeks ago, Koval had been visiting the shops on Larchmont and was walking back to his car when he spotted dozens of small Ukrainian flags on the front yard of a home on the southeast corner of Lorraine Boulevard and Second Street. He stopped and asked the homeowners, who were sitting on chairs on the lawn, what was going on.

Erwin and Kim McManus explained they were trying to raise money to help those suffering in Ukraine. They are the founders of Mosaic, a multi-campus non-denominational church located on Hollywood Boulevard near La Brea Avenue, with seven campuses from Seattle to Mexico City.

Kim and Grygorii started talking and soon the idea for a concert to support his music school back home was born. With the help of Erwin and Kim’s son-in-law Jake Goss, a drummer in the popular pop band LANY, the concert was on for Sunday afternoon.

Sunday morning, however, Koval turned on the television and was horrified. Footage had been released of dead bodies of Ukrainians scattered like litter along the streets of Bucha. For more than a month, Koval had been miserable about the war – particu­larly over the devastation of the city of Mariupol – and this graphic footage brought him even lower. Still, he knew that old show biz cliche, “the show most go on.” More than ever, the show to help his people must go on, he thought.

One by one, two by two, people began showing up. Kim warned some of the crowd about the hor­rors Koval had seen on television. Then she added, “No matter how far away the war is from us, we can still do some good.”

In front of 50 people, many of them the McManus’ neighbors, Grygorii took a seat near the home’s entrance. In a barely audi­ble voice, he told how this first song was a 1961 piece from the Soviet Russian composer Sofia Gubaidulina from Tartarstan. Head bowed, he dedicated this to the peo­ple of Mariupol.

He followed with a fittingly aching piece by J.S. Bach known as Suite in G minor BWV 995. This was dedicated to Kyiv. Koval’s technique was masterful, his heart­felt emotions clearly felt by all in attendance.

As the Bach piece ended, a young woman carrying two large Ukrainian flags arrived, Hanna Husakova, who sadly said her fam­ily is still in Ukraine and not safe. She said where they were, but when she realized I was a reporter, she immediately implored me not to print the location. Her fear and pain were in plain sight.

But Husakova was uplifted by the concert.

“I was sitting on a swing and sending it out live on Instagram and I got reactions right away from peo­ple in Ukraine who were able to see it,” Husakova said. “It made me cry to know they were safe.”

And the support she felt from Americans in general has deeply moved her. “As a Ukrainian, to see how many people here support us, real people, not politicians, but real people, it has been so heartwarm­ing.”

The last song Grygorii performed was Eric Clapton’s “Tears In Heaven.” There weren’t many dry eyes on Second and Lorraine.

To support the cause, visit gui­tarsalon.com/blog-gsi-foundation-scholar-grygorii-koval-raises-funds-for-guitar-students-in-vinnyt­sia-ukraine.

I just don’t get Hawaii