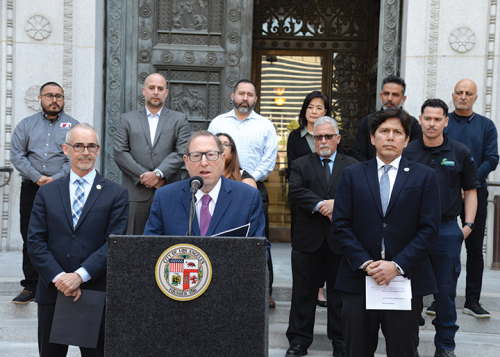 “Illegal dumping used to be a nuisance relegated to back alleys, but the problem has exploded throughout our city in recent years and now plagues our streets and neighborhoods,” de León said. “Criminals flagrantly scoff at our laws and dump mountains of trash and debris openly while city services struggle to keep up. Today, we’re bolstering our city services so we can get our streets cleaned up and hold criminals trashing our communities accountable.”

The trio announced an increase in city services, including the doubling of the L.A. Sanitation and Environment staff assigned to address illegal dumping and spot cleanups, thereby reducing the city response times and expanding the city’s Comprehensive Cleaning and Rapid Engagement program for homeless encampments.

To increase response times, the proposal will specifically,add 61 permanent new positions to LASAN, appropriate $4.45 million for salaries and expenses, allocate $10.7 million for a fleet of 25 new collection vehicles to expand the city’s existing Multi-Family Bulky item pickup program, identify and expedite development of new regional facilities to deploy staff and equipment faster and call for a detailed multi-lingual and multi-platform strategy for increased public education.

The proposal will also reconvene the city’s interdepartmental Illegal Dumping Working Group made up of representatives from city departments to consider implementation of camera enforcement, a progressive fee/fine structure for illegal dumping and environmental design to deter illegal dumping.

“The health and well-being of a city and its residents can be measured by the amount of trash and debris on its streets. Last year, the Bureau of Sanitation responded to more than 30,000 illegal dumping calls and removed almost 15,000 tons of solid waste from our streets. This doesn’t bode well for the health and well-being of Angelenos, particularly low-income communities of color that have borne the brunt of this problem,” Koretz said. “[This] action is more than a year in the making and a significant step toward providing more funding and staff, and ramping up both education and enforcement. Los Angeles won’t be a dumping ground any longer.”

“A clean city is a safe city, and illegal dumping is a public hazard,” O’Farrell said. “Angelenos want and deserve clean neighborhoods. With better education, coordination, and resources, today’s action is a major step forward in the right direction.”

A recent report released by the L.A. City Controller’s office found that illegal dumping of trash and hazardous items in the city’s public areas rose an unprecedented 450% between 2016 and 2020. In 2016, solid waste picked up by sanitation crews was approximately 9,200 tons. By 2020, the amount of solid waste collected reached 14,500 tons in just the first eight months of the year. Thousands of tons of trash and hazardous waste are illegally discarded on streets, in alleys, and along with other public spaces annually, particularly in low-income neighborhoods.

“We at LASAN are extremely appreciative of the leadership of these council members and the entire City Council for dedicating additional resources for us to provide services faster and more efficiently,” Sal Rosales, chief environmental compliance inspector in the Livability Services Division, said.  “As the city’s environmental utility, we take seriously our responsibility to ensure environmental public health and safety for all Angelenos. These new resources will have a significant impact in meeting our goals.”

Inspector general to serve as watchdog over LADWP