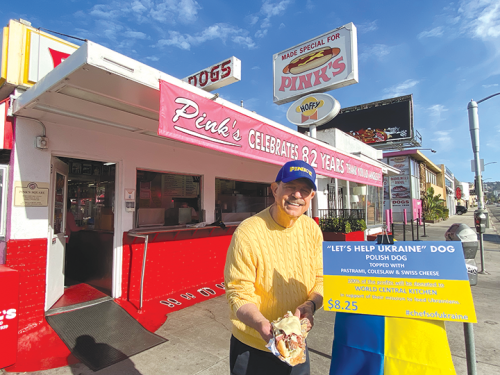 Pink’s Hot Dogs at La Brea and Melrose avenues has a long history of giving back to those in need, frequently creating special hot dogs to raise money for charity.

Last week, owner Richard Pink unveiled the “Let’s Help Ukraine Dog.” Proceeds will be donated to the World Central Kitchen, whose #ChefsForUkraine effort is delivering food, meals and support to Ukrainians struggling to survive during the war with Russia.

Pink said he was devastated to read stories and see photographs in the news showing the destruction in Ukraine, and was particularly struck by the resilience and perseverance of the Ukrainian people. He learned of World Central Kitchen’s efforts and wanted to generate support at Pink’s. The “Let’s Help Ukraine Dog” is a Polish dog topped with pastrami, coleslaw and Swiss cheese.

“I put it on the menu and am going to offer it until the war is over,” Pink said. “I wanted to do it because of everything I read in the newspapers. And the heroism of President Zelensky and all the people in Ukraine. When I think about it, I tear up. They have had such a tough time over there.” 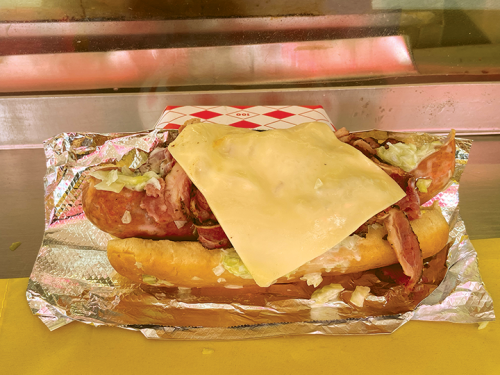 The “Let’s Help Ukraine Dog” is a Polish dog topped with pastrami, coleslaw and Swiss cheese. (photo by Edwin Folven)

World Central Kitchen was founded in 2010 by celebrity chef José Andrés in response to a devastating earthquake in Haiti, and now provides food to people in need around the world. Shortly after the Russian invasion of Ukraine, World Central Kitchen began serving meals to refugees at the border. The organization has also delivered food and support to restaurants and families within Ukraine. For information on ways to help, visit wck.org.

Pink added that sales of the $8.25 “Let’s Help Ukraine Dog” have been brisk, and he hopes to make a big donation to assist the people of Ukraine.

“World Central Kitchen is doing a lot of good work in Ukraine and I’m glad to be able to help.”