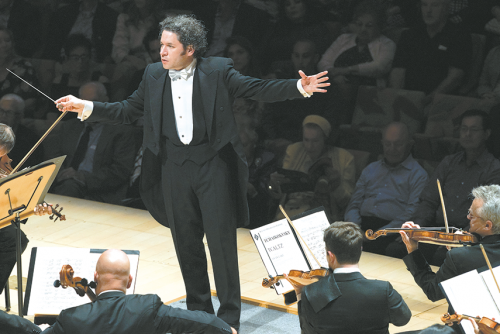 Los Angeles Philharmonic music and artistic director Gustavo Dudamel will conduct the orchestra and a star-studded cast in a ground­breaking performance of Beethoven’s opera “Fidelio” from April 14-16, at 8 p.m. at the Walt Disney Concert Hall.

Created for deaf and hearing audiences, the performance is pro­duced in collaboration with Deaf West Theatre and deaf performers of El Sistema’s Coro de Manos Blancas. It draws on both American Sign Language’s expressive, gestur­al poetry and Beethoven’s music to tell a powerful tale of redemption and liberation. The idea for the pro­duction was originally developed by Dudamel through his foundation, which he co-chairs with his wife, actress María Valverde, as a means of elevating deaf artistry to illumi­nate the opera’s central theme of fighting to overcome obstacles to discover one’s own personal free­dom. “Fidelio” premiered in 1805 as Beethoven was losing his hear­ing.

“All art is rooted in the deeply human need to communicate some­thing, and to have that communica­tion be received and felt,” Dudamel said. “‘Fidelio’ is perhaps Beethoven’s purest expression of our ability to overcome adversity, and to reach one another across a seemingly insurmountable divide. That belief in the transformative, transcendent power of music is at the heart of this production, where we have partnered with the extraor­dinary artists of Deaf West Theatre and the Coro de Manos Blancas in order to offer a performance with equal resonance to both deaf and hearing audiences, and remind us that there is always light through the darkness.”

“Rarely do the opera houses and concert halls throughout the world open their doors to the deaf com­munity,” added D.J. Kurs, artistic director of Deaf West Theatre. “Together with the LA Phil, we have been able to create an experi­ence that brings new facets of music to deaf and hearing audi­ences.”

The entire performance will be signed and sung, with supertitles provided.

Poets get down at annual festival