One in custody, one still sought for Melrose robbery 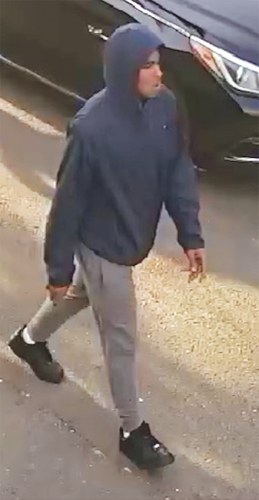 Police are still searching for a second suspect who was involved in an attempted robbery with shots fired on April 20 near Melrose Avenue and Ogden Drive. (photo courtesy of the LAPD)

A 22-year-old male suspect was arrested on April 18 for an attempted robbery in the Melrose District on April 10 in which a victim was shot at as he fled from two armed men attempting to steal his watch, police said.

The Los Angeles Police Department’s Follow Home Robbery Task Force investigated the case and arrested Jamario Kevin Ray, of Los Angeles, in connection with the attempted robbery. Ray was arrested when authorities served a search warrant at his residence, police said. The suspect was on parole for assault with a deadly weapon and had a warrant for a parole violation.

The attempted robbery occurred at approximately 4 p.m. on April 10 near the corner of Melrose Avenue and Ogden Drive. The male victim told police he saw two men walking out of an alley and they appeared to be watching him. The victim, who was wearing an expensive wristwatch, ran inside a store. One of the suspects fired six shots at him but missed. The bullets struck the store, which was not identified by authorities. Nobody was injured, police said.

Investigators located security cameras in the area that allegedly showed the suspects arriving in a vehicle that parked nearby, and then leaving in the same vehicle. Detectives are still seeking a second male suspect who was involved in the attempted robbery. Police described the second suspect as Black, in his 20s, approximately 6 feet tall and 170-190 pounds. He was last seen wearing a navy blue hooded sweatshirt, gray pants and black shoes.

Det. Chris Marsden, with the LAPD’s Robbery-Homicide Division, said the crime near Melrose and Ogden is part of a series of robberies citywide in which suspects target people wearing expensive watches and jewelry. Authorities believe up to 17 different gangs are committing the same type of robberies, and many of the hold-ups have occurred in the LAPD’s Wilshire and Hollywood divisions in places like the Melrose District and the La Cienega Boulevard corridor.

“This is the busiest time I have had as a robbery detective,” Marsden added. “These cases are happening all over the city.”

Anyone with information about the attempted robbery is asked to call the Follow Home Robbery Task Force at (213)486-6840.

Suspect charged for sex crimes in case that originated in WeHo