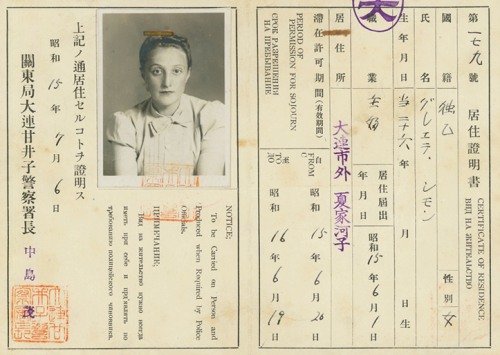 Holocaust Museum L.A. presents “Hidden History: Recounting the Shanghai Jewish Story,” an exhibit about the little known story of the resettled Jewish community of Shanghai opening on Sunday, April 24, and running through mid-August.

The exhibit is sponsored by East West Bank and told through the museum’s collection of artifacts, as well as artifacts on loan from families who lived in Shanghai and the intimate photographs of Arthur Rothstein. Prior to the Holocaust, the Shanghai Jewish community included 1,000 Sephardic Jews who arrived from Iraq in the mid-1800s, as well as a few thousand Ashkenazi Jews who fled Russia. During the 1930s, Nazi violence and antisemitic policy forced German and Austrian Jewish refugees to flee, but few countries would let them in. Shanghai became an unexpected refuge for the Jewish refugees. Following Pearl Harbor and the Japanese’s full occupation of the city, the Jewish refugees were forced to relocate to the Shanghai Ghetto.

Five families’ experiences in Shanghai are highlighted in the exhibit: the Medavoy, Maimann, Kolber, Friedmann and Millett families. The exhibit also features a yarmulke (kippah) on loan from the Skirball Cultural Center. Family artifacts on display include postcards from concentration camps, a ketubah (Jewish marriage contract) written in Chinese and a tallit (prayer shawl) embroidered with the Star of David and a wreath of plum blossoms, symbolic of resilience and perseverance in Chinese culture.

Rothstein, an award winning photojournalist, documented the Shanghai Jewish community for the United Nations in 1946. His portraits convey the multifaceted stories of desperation, loss and refuge, organizers said.

A private opening event titled “Refugees, War and Hate: Understanding the Intersection of Antisemitism and Refugee Crises” will be held April 24 at 4 p.m. at the museum. It will feature a panel discussion with U.S. Reps. Ted Lieu and Adam Schiff, Academy Award-winning producer Mike Medavoy, whose family artifacts are on loan to the museum for the exhibit, and Rothstein’s daughter, Dr. Ann Rothstein Segan. Tickets to view the private event virtually are $100.

Holocaust Museum L.A. is located at 100 The Grove Drive. For information, visit holocaustmuseumla.org/event-details/refugees-war-and-hate-understanding-the-intersection-of-antisemitism-and-refugee-crises.