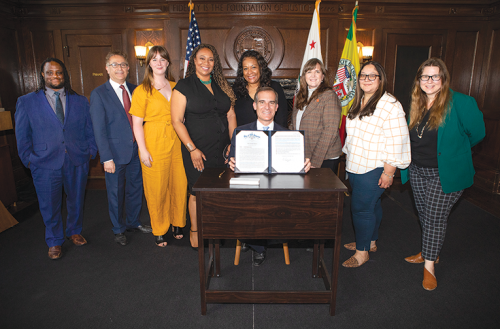 Los Angeles Mayor Eric Garcetti on March 31 signed an executive directive outlining new measures to elevate the city’s commitment to diversity, equity and inclusion, including the implementation of a new citywide workplace equity policy that was unanimously adopted by the City Council.

“This comprehensive policy outlines employees’ rights and responsibilities, and also cements the city’s commitment to fostering a workplace rooted in empathy, inclusion and mutual respect – values necessary for the city to recruit and retain employees who both reflect and understand the diverse communities they serve,” Garcetti said.

The executive directive will expand the Los Angeles Personnel Department’s focus on preventing harassment and discrimination to a more systemic and preventative focus on diversity, equity and inclusion. Through the establishment of a new Equity Review Panel and the Office of Workplace Equity in the Personnel Department, Los Angeles will create a more equitable and inclusive environment for employees, Garcetti said. The signing of the executive directive culminates over four years of work with city departments, labor partners and elected offices on the policy.

“All of our city employees deserve to be treated with dignity and respect. This Workplace Equity policy clearly defines that goal and the means of achieving it,” said Councilmember Paul Krekorian, 2nd District. “It will reduce costs to the city associated with litigation and mismanagement by requiring managers and supervisors to intervene before workplaces become unsafe or unwelcoming.”

The Workplace Equity Policy was developed by combining key points from over a dozen existing documents that pertain to workplace conduct, as well as incorporating new best practices. It includes new prohibitions against conduct such as bullying and microaggressions. The policy will be supported by mandatory training to ensure all employees understand what is expected of them.