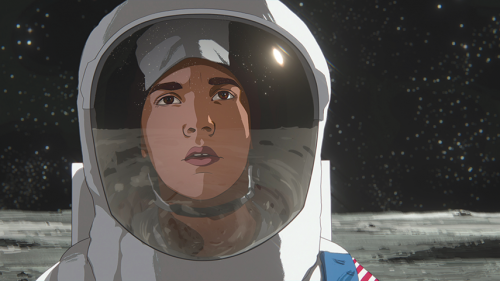 Milo Coy portrays Stan in “Apollo 10½,” an interesting look at life during the beginning of the Space Age. (photo courtesy of Netflix)

Nostalgia is dangerous. Aimed at the wrong target, it ignites masses to believe in a fabrication, some­thing rightfully long gone or that never existed. Richard Linklater is no such maniacal rhetor bending our will toward an unseemly fable.

Far from it, “Apollo 10½: A Space Age Childhood” is an enchanting odyssey through late ’60s Houston. It presents itself as a sci-fi adventure, but that’s a red her­ring. The real story, and all the joys it offers, arises along the way.

When Linklater isn’t embarking on slice-of-life stories across the ages – from “Dazed and Confused” to “Boyhood” – he occasionally dips into animation. He specifically champions a unique approach called rotoscoping, the practice of painting atop filmed footage. While the practice peppers animation his­tory, Linklater’s three forays almost entirely feature it.

Like “Waking Life” and “A Scanner Darkly” before, “Apollo 10½” serves up animated live action. In previous films, this approach enhanced philosophical quandaries and questioning reality. Here, it rather literally animated Houston during the space race.

Initially, the setting feels inconse­quential when young Stan (Milo Coy) faces the most exciting mis­sion from NASA: pilot a space craft accidentally made too small for a regular-sized astronaut. As his secret training begins, the story immediately flashes back.

This tactic enjoys a long, often tired history across many motion pictures. After all, why cut away from the action and force spectators to wait another 20 minutes to an hour for the story to move forward? Not a problem for the “School of Rock” director. It’s a ruse anyway.

Well, it might feel like a ruse once the climax arrives. But as the whole experience sinks, it reveals itself as a necessary distraction from the point and the point. With the help of adult Stan (Jack Black) narrating everything, the entire his­tory of the Texas city unravels.

Stan grows up with a city almost completely devoid of history. New developments arrive across flat­lands. Stan and his large family keep busy with a host of activities, jobs and home shenanigans. And then comes NASA, standing in for all the history other major cities renovate, demolish or build on top. NASA is the legacy of Houston.

Perhaps the most Linklater aspect is a lack of major faces. Zachary Levi as NASA big wig Krans only graces the story a few times, key they may be. And Black never arrives on screen, but his voice serves as a guide through another era. Most frames are filled with unfamiliar faces who so expertly embody a story from 63 years ago.

Plenty of Linklater’s work travers­es the Lone Star State, but “Apollo 10½” is a love-letter to Houston, the first to do so. In 2018, he described “Apollo 10½,” unnamed during development at the time, as “a very Houston movie, couldn’t be more Houston, the ultimate Houston movie,” he told the Houston Chronicle. That’s an apt description.

No driving plot, only meandering sequences around town. Folks live their lives, encounter a broader world through the evening news, and do the best to both get by and create lasting memories. This is everyday life surrounded by extraor­dinary, historic moments underway not two miles from a bowling alley.

“Apollo 10½” serves as a combi­nation of Linklater’s greatest hits: naturalist storytelling that rejects a tidy three-act conflict and visual experimentation. Both seem at odds with each other. At least “Boyhood’s” grandiose goal to film a story for more than a decade, fea­turing one actor growing up on screen, blended originality with a rejection of Hollywood pacing.

Here, the incredible animation immortalizes an otherwise common life. Around 53 million Americans watched the moon landing, yet the story of one typical family’s day-to-day adventures so close to that incredible moment propels them along with any other spacecraft.