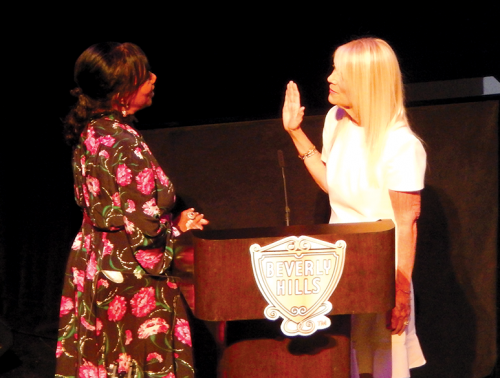 Lili Bosse, right, was sworn in by former U.S. Ambassador to the Bahamas Nicole A. Avant at The Wallis. (photo by Rance Collins)

After being sworn in during the Beverly Hills City Council’s reorganizational meeting on April 5, Mayor Lili Bosse introduced several new public safety measures the Beverly Hills Police Department and the city will bring before the council next week.

The department is looking into the creation of a real-time watch center, which will ensure live monitoring of approximately 2,000 security cameras in Beverly Hills. Further, BHPD is implementing a text message alert system for the community and a system for police officers to hear emergency calls without awaiting instructions from dispatchers.

“We have witnessed theft and violence in our streets, hate-filled, antisemitic flyers dropped on our doorsteps, and we have dealt with the trauma and the loss of not being able to just be together when needed each other the most,” Bosse said. “But, tonight starts a new chapter in the story of Beverly Hills, and we’re going to write it together.”

She said it has become clear that residents need “timely, accurate information” from the BHPD, which is why the city has developed a text message notification system that can be accessed by texting “BHPDAlert” to 888777.

“Events in real-time are incredibly important in this era of social media, apps and neighborhood chats,” Bosse said. “Information has a way of spreading quickly, but often it’s not accurate or helpful. These days, safety is always on our minds. I want you to be able to receive information directly from our Beverly Hills Police Department immediately as events occur in our city.”

She said the real-time watch center will be “phased-in” to enhance security camera coverage in Beverly Hills.

“Also supporting the monitoring of live cameras is seven-day-a-week coverage of drones to enhance and support security from the air,” Bosse added. “We’ll also be adding 16 automated license plate reader sites in strategic locations. All of these technologies will be coordinated in the real-time watch center.”

To enhance response times – even though the department has “some of the fastest response times in the country” – the mayor announced the launch of Live 911, which will allow police officers to hear emergency calls as they are reported.

“But, even with the latest technology and ability to catch criminals, if they aren’t held accountable for their actions, nothing will change,” Bosse said. “I am proud that I came out very early to call for a vote of no-confidence in L.A. District Attorney George Gascón. …If there are no consequences to crime, we live in chaos. We live in Gotham City.”

Further, the police department is looking to increase the number of women in leadership positions within the department, she said.

“We are a city that funds our police and have – and always will – dedicate every resource they need,” Bosse added. “Always.”

She said the department is in the process of recruiting more officers. Five new officers began work this week, and an additional 16 are in the application process, Bosse said.

While public safety has been a major issue in Beverly Hills, so has public health. The mayor said she will again ask the council to consider creating the city’s own local health department.

“It’s time for us to lead in public health and decide what’s best for our city,” Bosse said, adding that she wants to promote affordable housing projects in Beverly Hills as well.

She also referenced Just in Case BH, a grassroots emergency preparedness program that aims to direct community members to medical assistance and other resources when first responders may be inundated with requests.

“This program, along with our neighborhood watch resident program, [is] making a difference every day,” Bosse added. “I’m so grateful, with all my heart, for everyone who has worked hours upon hours to make sure our communities are informed, safe and connected to one another.”

Mental wellness is another area that the mayor hopes to improve for residents. Bosse said spiritual teacher Deepak Chopra “is back.” He, along with Holocaust survivor Edith Eger, will offer programming to residents of Beverly Hills.

“Over the last few years, we have all been overwhelmed by a global health pandemic, increased crime, uncertainty, anxiety, political division, isolation and trauma,” Bosse said. “This has definitely taken a toll on our mental health and wellbeing. I’m the first to admit that these challenges have changed me forever and put life in perspective.”

To support local businesses, the mayor announced “Business with Bosse,” an effort to celebrate what local businesses “bring to our city.” Bosse said the first event will be from 6:30-8 p.m. on April 25 at Tommy’s Beverly Hills.

Additionally, she will once again provide small businesses with a “60 Second Shoutout” during council meetings to showcase their contributions to the community. Next week, the council will honor Impasta.

“Tonight, we are starting a new year in the life of our beloved city,” Bosse added. “We all recognize how lucky we are to live and do business in Beverly Hills, but we also know that we are not immune to the changes and challenges that we face going forward.”

Outgoing Mayor Robert Wunderlich, who will now serve as a councilman, thanked the community for its support during his tenure as mayor.

“We’ve done a lot, and there’s more to do,” he said. “I’m proud of what we’ve accomplished during my year as mayor, and I’m confident of our path forward.”

Councilman Julian Gold was unanimously approved as the city’s new vice mayor. He said he is excited about Bosse’s vision.

“There is much we need to do going forward. … I look forward to helping her and the council accomplish [those goals],” Gold said. “Thank you for your support of me and for your faith in me. It’s an honor for this election.”

A changing of the guard at WeHo Sheriff’s Station