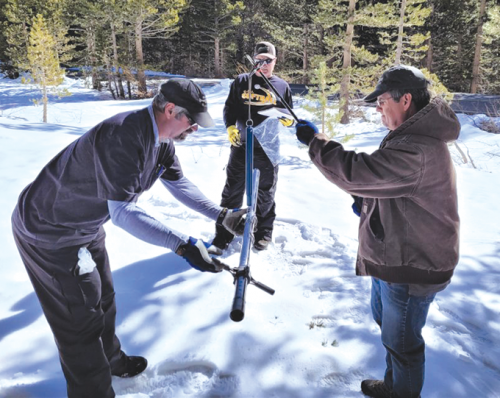 Hydrographers with the Los Angeles Department of Water and Power take measurements during a recent snow survey in the Eastern Sierra. (photo courtesy of LADWP)

The Los Angeles Department of Water and Power is asking all customers to step up their conservation efforts following results of the final snow survey for the season that showed a dramatic decline in water content between February and April due to unusually early and rapid snowmelt.

On April 1, the snowpack was 41% of normal; however, on April 12, readings from LADWP’s Eastern Sierra snow measuring stations showed the snowpack had melted to 22% of normal, the equivalent of 4.9 inches of water content.

“We’ve had three consecutive record-dry months during the third year of dry conditions. That, combined with the early-season snowmelt and the anticipated limited availability of State Water Project supplies, has put the city’s water supply in a critical situation,” LADWP general manager and chief engineer Martin Adams said. “With warmer spring and summer months approaching, we must increase conservation now. This is a time for all of us to be vigilant in saving water wherever possible.”

LADWP conducts snow surveys from February to April at six locations in the Eastern Sierra, where snowmelt feeds into the Los Angeles Aqueduct, one of four major water sources for Los Angeles.

Along with the Los Angeles Aqueduct and local groundwater, LADWP receives water from the State Water Project and the Colorado River Aqueduct, both water supplies purchased from the Metropolitan Water District of Southern California.

LADWP’s April snow survey results mirror the state snowpack levels, which remain well below average. The dry conditions combined with low reservoir levels throughout the state, led to the state’s recent decision to cut water allocations from 15% to 5% from the State Water Project, which comes into LADWP’s water system via MWD.

Water officials in the region are assessing drought response actions that may include significant outdoor watering restrictions for impacted areas. LADWP is one of the few water agencies across the state to mandate water use restrictions continually since 2009.

LADWP has remained in Phase 2 of the city’s Water Conservation Ordinance, which limits outdoor watering to three days a week, along with other permanently prohibited uses of water. LADWP may need to go to higher restrictions in the coming months to respond to the latest supply conditions.

Thanks to a culture of conservation, Angelenos use less water now than they did more than 50 years ago, despite a population increase of more than one million people.

LADWP recently boosted rebates for water-efficient devices, appliances and other measures for residential and commercial customers.

For LADWP’s commercial customers, LADWP announced in January an eight-fold rebate increase of up to $2 million to the department’s Technical Assis-tance Program, a financial incentive program for customized water conservation projects, such as upgrades of cooling towers, that help multifamily, commercial, institutional and industrial customers save water.

To help customers reduce their outdoor water use, LADWP offers rebates for replacing water-thirsty lawns with sustainable and drought tolerant landscaping. Residential and commercial or multi-family customers can receive $3 per square foot of turf. LADWP and MWD recently increased turf replacement rebates for public agencies to $4 per square foot for up to 200,000 square feet. Single-family residential customers can also take advantage of free landscape design services to help swap out their turf.

Water line project on Rossmore to cause traffic delays