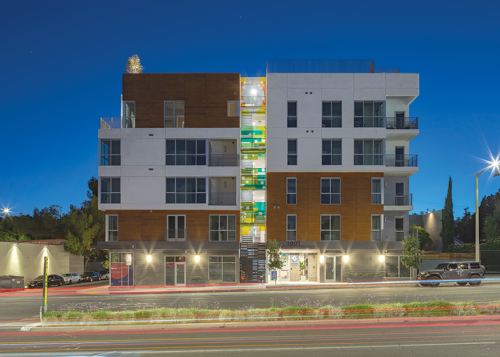 The façade of the new Empire at Fairfax residences in West Hollywood features a public art display symbolizing traffic patterns in the area. (photo courtesy of Judson Studios)

Judson Studios, the oldest fami­ly-run stained glass studio in the United States, has fabricated and installed a new public artwork in West Hollywood.

Designed by artist Laurie Frick, “FLOW: Fairfax Traffic Data” is located on the façade of the new five-story Empire at Fairfax resi­dences at Fairfax Avenue and Romaine Street. Brightly colored, kiln-fired glass art was used to visu­alize traffic patterns in the neigh­borhood.

“For this massive project, I want­ed an idea that will appeal not only to people who live in the building and see it up close, but also to the random driver who passes by or the commuter who drives by that spot every day. A simple graphic pattern that people would be happy to see day after day,” Frick said. “Growing up in Los Angeles, I know how essential traffic patterns are to life here. With this work, traf­fic data becomes something artful in a section of the city where traffic is not normally beloved.”

Empire at Fairfax was built by the Empire Property Group.

“We always fall in love with the most recent projects that we’ve completed,” Empire Property Group founder and managing part­ner Craig Berberian said. “And Empire at Fairfax is absolutely no different … but this one feels a little extra special. The artwork installa­tion by Laurie Frick and fabrication by Judson Studios truly enhances the vibrant feeling of the property and the community.”

Using the data from West Hollywood’s Open Data portal, the artist built bar charts tracking the number of northbound and south­bound vehicles traveling past the property. The highest traffic flow is represented in green and the lowest in red. To accurately represent traf­fic flow, Frick used small squares of clear glass to map cumulative traf­fic over 24 hours. She flipped northbound and southbound charts on end, overlapping them to fit into the tall, narrow glass façade that covers the building’s exterior stair­well from top to bottom.