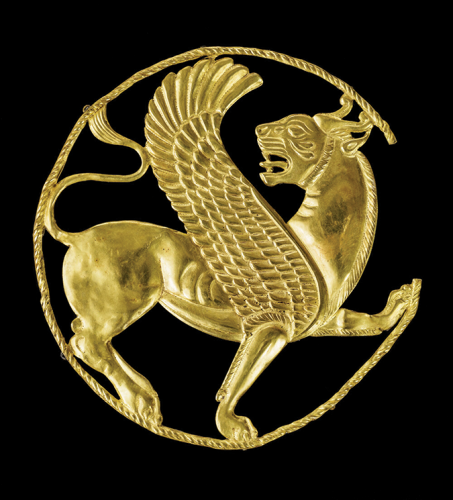 “Plaque with a Winged Lion-Griffin” will be among the pieces on display at the Getty Villa for their exhibition highlighting ancient Iran. (photo courtesy of the Oriental Institute of the University of Chicago)

Ancient Iran, historically known as Persia, was the dominant nation of western Asia for over a millenni­um, with three native dynasties, the Achaemenids, Parthians, and Sasanians, controlling empires of unprecedented size and complexity. Their principal military rivals throughout this period were the ancient Greeks and Romans, with whom they nevertheless enjoyed an active exchange in many aspects of architecture, religion and court cul­ture, as is demonstrated in the art­works they produced.

This spring, the Getty Villa Museum presents the exhibition “Persia: Ancient Iran and the Classical World,” the first major U.S. exhibition to highlight the relationship between the classical world and ancient Iran. In addition to the spectacular ancient works on view that explore the artistic and cultural connections between the rival powers of Iran, Greece and Rome, the exhibition is supported by two innovative digital experi­ences: a 360-degree immersive film onsite at the Villa and a highly interactive online website.

“The military rivalry between the ancient Persian empires that con­trolled much of the modern Middle East, and the Greeks and Romans of the eastern Mediterranean, deter­mined the geopolitical map of Eurasia from Britain in the west to the border of India in the east for over a thousand years,” Timothy Potts, director of the J. Paul Getty Museum, said. “The many spectac­ular objects on view are extraordi­nary expressions of Persian politi­cal and cultural identity, many of them among the most famous mas­terpieces of Persian art. I hope this exhibition will convey how fruitful the intermingling of very different artistic and other cultural traditions was for both cultures, as can still be seen in aspects of our visual arts today.”

A separate online digital experi­ence created in conjunction with the exhibition allows visitors the opportunity to soar over a 3-D re-creation of Persepolis and take an interactive walk through the palaces, terraces, audience halls and chambers of the massive com­plex in southern Iran. As visitors scroll their way through the rooms, they can zoom in on 3-D images of the coins, vessels, inscriptions and reliefs that would have been used in these spaces. This interactive web experience will be available in eight languages, including Persian, Arabic, Hindi, Chinese (simplified and traditional), Spanish, French and English, bringing ancient Persepolis to life for visitors around the world. The online expe­rience is available at getty.edu/persepolis.

“Persia: Ancient Iran and the Classical World” is on display at Getty Villa Museum now through August 8.

The Getty Villa is open Wednesday through Monday, 10 a.m. to 5 p.m. It is closed Tuesdays.