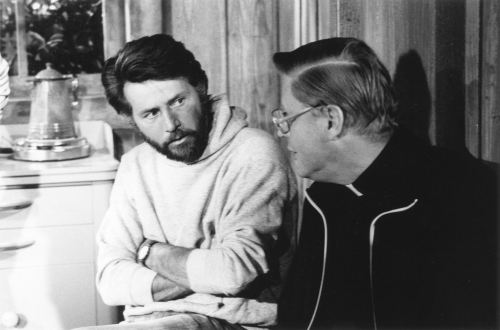 Enjoy “Hollywood Priest: The Story of Father ‘Bud’ Kieser,” which will be streamed online from April 20-27 at hollywoodpriest.com/crs.

The unique documentary details the life, entertainment industry career and national influence of Father Edward “Bud” Kieser, a Catholic clergyman and founder of Paulist Productions. The film is being shown in partnership with Catholic Relief Services West.

“Hollywood Priest” will also be shown by the Secret Movie Club on April 28, at 7 p.m. at its theater at 1917 Bay St. in downtown Los Angeles. It will be the first part of a double-feature presentation along with “Romero,” a film produced by Kieser in 1989. A special Q&A session with “Hollywood Priest” filmmakers Father Tom Gibbons and Maria-Elena Poblacion Pineda will be held. For information, visit secretmovieclub.com/calendar/hollywood-priest-amp-romero-w-filmmaker-qampa-the-secret-movie-club-theater.

“Hollywood Priest” presents an in-depth profile of Kieser, a longtime resident of Los Angeles who passed away in 2000 at the age of 71. Kieser served as a Roman Catholic priest for 44 years. His legacy continues with the annual Humanitas Prize, an honor which he founded in 1974. The Humanitas Prize honors film and television writers whose work inspires compassion, peace, love and dignity.

‘Sleeping Beauty’ returns to the big screen in Hollywood