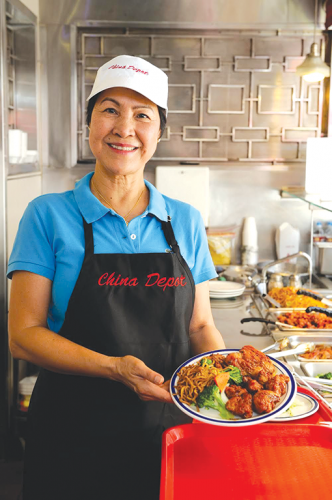 The Original Farmers Market, corner of Third and Fairfax, is celebrating Asian American and Pacific Islander heritage month in May by spotlighting members of the Asian community that have long been part of the market

From merchants who were among the first to establish storefronts at the market in the 1930s-40s to current favorites who now call it home, vendors from a variety of countries including China, South Korea, the Philippines, Japan and India have played an important role in the history of Original Farmers Market, its owners said.

Angie Chang owns Bryan’s Pit BBQ, a market staple since 1961, and China Depot, which was established in 1948 and is among the oldest vendors in the market. She operates both businesses with her son, David, and daughter-in-law, Nicole, as well as grandchildren, David and Ava, who help from time to time.

Peking Kitchen is owned by husband-and-wife Annie and Tony Zou. Natives of Hong Kong, they took over Peking Kitchen when Tony’s Aunt Betty, the original owner, retired in 1989. Annie Zou does most of the cooking while Tony chats with customers at the counter.

Light My Fire and T Shop are two unique stores owned by South Korean native Young Min. For those who love spiciness, Light My Fire offers more than 1,000 varieties of hot sauce. To help curb the fiery explosion of flavors, stop by T Shop and indulge in over 250 varieties of teas from throughout the world.

AAPI vendors have made Third and Fairfax their home-away-from-home for decades, offering visitors a glimpse into their rich backgrounds. The Original Farmers Market is proud to celebrate the important figures in the community throughout May and the entire year.