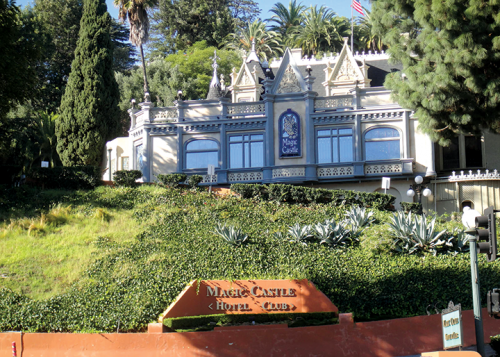 Magician and entertainer Randy Pitchford’s purchase of the Magic Castle will ensure the iconic property is preserved. (photo courtesy of Wikimedia Commons)

The Academy of Magical Arts, which uses the Magic Castle as its clubhouse, was notified during its recent annual meeting that Randy Pitchford, magician and entertainer, is purchasing the Magic Castle.

Pitchford, commonly recognized as the founder of the Gearbox Entertainment Company, which developed the Borderlands franchise, is a lifelong magician and member of the AMA. In addition to the Magic Castle and his leadership of Gearbox Entertainment, Pitchford owns Genii, the leading magazine dedicated to magicians and the magical arts that Academy of Magical Arts founder William Larsen Sr. started in 1936.

“The Magic Castle is like bedrock – the center point of magic. The people who think of the Castle as their home and the place itself seem to have magical properties that have created and inspired some of the world’s greatest entertainers,” Pitchford said. “I’m proud to be trusted to both give back to the place that made me become the custodian of the Magic Castle and to work with its members and the Larsen family to ensure our most incredible club house grows and thrives for decades to come.”

“Randy’s purchase of the Magic Castle brings the heart and soul back to this institution that I have loved and devoted my life to. I know my parents would be thrilled with this news,” Erika Larsen, daughter of Magic Castle founders Bill and Irene Larsen, said. “Randy’s business-acumen, long-standing commitment to magic, and his love for the Magic Castle make him the perfect owner.”

Pitchford, who is the grandnephew of the celebrated 20th century master magician the Great Cardini, purchased the Magic Castle from the Glover family, which had owned the property since 1961 when Thomas O. Glover bought the home and land. In that same year, Glover leased the building to William (Bill) Larsen Jr., Irene Larsen and Milt Larsen, all of whom began the Magic Castle. This sale of the Magic Castle draws together two families of the magical community, the Larsens and the Pitchfords.

“Randy Pitchford has done something extraordinary to protect our beloved Magic Castle and I could not be happier about our current situation as well as the prospects for the future. Randy really understands and appreciates my vision and the Larsen family vision and there is no one better to carry on what we started in 1963,” Magic Castle co-founder Milt Larsen said.

Numerous luminaries of the magic community and celebrities performed over the years at the Magic Castle, including Orson Welles, Johnny Carson, Steve Martin and Neil Patrick Harris, who was a past president of the AMA. The magic community came out in force to celebrate Pitchford’s purchase.

“Randy’s leadership presents an incredible opportunity for the Magic Castle and its future,” David Copperfield, multi-Emmy award-winning illusionist and AMA member, said. “Randy brings to the table an incredible passion for magic and remarkable experience in leading successful businesses. I can’t think of anyone better who can honor the Magic Castle’s history, but ensure it maintains its relevance and positions it for growth for years to come.”

“I’ve known Randy Pitchford for years, and I know he has a day job, but in my mind he’s a magician. I believe Randy’s heart is in magic. For as long as I’ve known about the Magic Castle it’s been a bit precarious. I always worried about it. Now I don’t need to,” Penn Jillette, the taller half of Emmy-winning magic legends Penn & Teller, said.

The Magic Castle, the clubhouse of the Academy of Magical Arts, is private, allowing entrance only to members and their guests, or through courtesy invitations which are available to magicians visiting from out of the United States. Visit magiccastle.com.