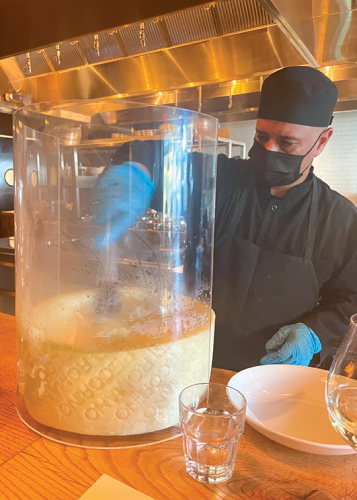 The chefs at UOVO swirl the cheese onto the pasta noodles when preparing cacio e pepe. (photo by Jill Weinlein)

Dining at UOVO recently, I was reminded of an episode of Stanley Tucci’s culinary travel show “Searching for Italy,” introducing viewers to mouthwatering dishes prepared by the actor-turned chef.

Sitting at the exquisite wraparound wood counter at the newly opened UOVO in Studio City, we had a front row seat to watch the chefs make one of their most popular pasta dishes, the Roman classic cacio e pepe.

Tonnarelli pasta is boiled in a fancy machine that looks similar to French fry baskets. The baskets dip into boiling water and rise when a bell dings, and the noodles are cooked to a perfect al dente. The piping hot pasta is then poured into a huge Pecorino Romano wheel and swirled in a circular motion multiple times for the melting cheese to glaze and bond onto the noodles. A blend of UOVO’s imported black pepper is sprinkled on top, then swirled a few more times before it is plated and presented to diners. The comforting, warm dish offers a pleasing aroma that wakes your senses and offers a sharp cheese flavor and slight saltiness that lingers on your tongue.

If Tucci hasn’t visited UOVO yet, he should come meet co-owners Jerry Greenberg, Carlo Massimini and Lele Massimini. They opened their first UOVO in Santa Monica, then launched locations on Wilshire in the Miracle Mile and Marina del Rey, eventually bringing the restaurant to The Shops at the Sportsman’s Lodge in Studio City. Greenberg and Lee Massimini are two of the founders of Sushi Nozawa Group SUGARFISH, along with sister company HiHo Cheeseburger, which are also located on Wilshire and in at The Shops.

The story is that Greenberg and Massimini were on a quest to eat the perfect pasta noodle, and along the way, Lele’s brother Carlo joined them. Carlo and Lele were born and raised in Rome, but their search took them to the epicenter of pasta making, Bologna, the lively, historic capital of the Emilia-Romagna.

“Our teams use traditional techniques and high-quality ingredients in our kitchens in both Italy and L.A. This attention to detail ensures consistency and quality with each and every dish. The result is pasta like what I grew up with in Italy and I am excited to share that with our new guests here in Studio City,” Carlo Massimini said.

UOVO’s menu features handmade pasta made with eggs, flour and salt. The eggs are from hens in Italy that produce a richer and deeper yellow yolk then the eggs in America. The pasta is flown to California in a temperature-controlled cabin using the shipping time as part of the resting time.

Reading the menu reminded me of another “Searching for Italy” episode, in which Tucci leaves Rome to embark on a culinary stop in Bologna, declaring the region the kingdom of egg pasta. Pasta is made with the age-old technique of sheeting and cutting. This intensive labor of love creates pasta with superior texture to bond the sauces.

The UOVO menu lays out the types of pasta they serve. The tonnarelli is the most similar to spaghetti, while the tagliatelle is a flat, medium width noodle, that in Rome is most similar to fettuccine. They also make a very thin noodle called tagliolini.

The one-page menu offers three tasting options that serve two people and include an appetizer, three pastas and dessert. The price ranges from $32 per person for the classic tasting and the regional tasting and $37 for the cheese and truffle tasting menu. Diners can also order a la carte to select their own specific dishes.

We started with the yellowtail crudo and insalata di crescione for our antipasti. The yellowtail arrived looking like a tropical red heliconia flowers. On a shallow white plate, eight slices of Japanese yellowtail slices were drizzled with olive oil and topped with red Fresno chili peppers green micro arugula and citrus blood orange dots creating an appealing dish.

At UOVO the ragù is made with 100% grass fed, Wagyu beef from First Light Farms that is sustainably raised and certified humane. They also use sustainably raised and antibiotic-free pork. No cheese, milk or cream is added to their ragu. The UOVO team discovered the recipe from “Antica Trattoria della Gigina” in Bologna, which they were gifted in 2015. When the ragu is poured on top of the hot noodles, diners are instructed to use their fork to mix the sauce and long pasta strands together.

The gentleman next to me at the pasta bar ordered the crema di parmigiano pasta made with handmade meat tortellini. We watched the chefs add pasta to a skillet and combine cream and Parmigiano-Reggiano cheese that melted when swirled, offering an exquisite aroma.

Tucci declared in another episode that his favorite dish to eat while in Italy is the Roman classic pasta alla carbonara. He said he would never order it outside of the country. Well, he needs to visit UOVO. The carbonara is made with tonnarelli noodles, egg, imported Italian guanciale pork, 24-month aged Parmigiano-Reggiano, Pecorino Romano and a blend of the aforementioned pepper. It’s delicious and like no other in greater Los Angeles.

Under the Pasta Classica section, the pillowy thin ricotta cheese ravioli is bathed in their signature pomodoro sauce, sourced from tomatoes from Basilicata. It’s so thin and soft that each ravioli melts in your mouth.

A few gluten-free pasta dishes are offered, and the chef encourages guests to eat their pasta the way it’s prepared without adding extra cheese or pepper.

Guests looking for dessert will find only one, a delicious tiramisu “al cucchiaio” a version that is popular in Rome, though not as well known in the U.S. The name means “by the spoon” and it is similar to a smooth and creamy parfait with a layer of chocolate on top.

A handful of Italian white wines include a Vermentino and Pinot Grigio by the glass or bottle, and red wines that include a Barbara D’Alba and Super Tuscan. Beer and non-alcoholic beverages are also on the menu.

What ‘Halo’ indirectly teaches us about adaptations

L.A. City Hall reopens on May 4