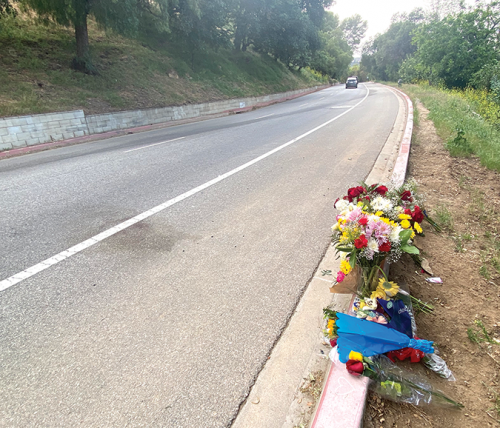 Flowers marked the location where cyclist Andrew Jelmert was struck and killed on April 16 in Griffith Park. (photo by Edwin Folven)

Members of the cycling community are mourning Andrew Jelmert, 77, who was struck and killed by an alleged drunk driver on April 16 as he was riding through Griffith Park.

Jelmert was an avid cyclist who had been riding for years. He was struck and killed during a training ride for the AIDS/LifeCycle, an annual ride and fundraiser in June from San Francisco to Los Angeles that benefits the Los Angeles LGBT Center and the San Francisco AIDS Foundation. Both organizations offered condolences via their social media accounts.

“We are heartbroken to share the news that a cyclist participating in AIDS/LifeCycle’s SoCal Day on the Ride lost their life after being struck by a vehicle on April 16,” the statement from the Los Angeles LGBT Center read. “The cyclist was … a five-time participant on AIDS/LifeCycle and member of the team Different Spokes. Leaders at the center, SFAF and AIDS/LifeCycle are in contact with Andrew’s family and extend their deepest condolences to his friends, family, teammates and loved ones.”

“This is a senseless tragedy, and our hearts go out to everyone who is affected,” added Joe Hollendoner, incoming CEO of the Los Angeles LGBT Center. “We revere each and every participant on AIDS/LifeCycle who dedicate their time, energy, passion and power to lift up a cause close to their hearts.”

The driver who allegedly struck Jelmert fled the scene but was arrested shortly after the collision, which occurred on a stretch of Crystal Springs Road that parallels the Golden State (5) Freeway north of Los Feliz Boulevard. Police identified the driver as Jairo Martinez, 37, of Los Angeles. On April 20, the Los Angeles County District Attorney’s Office announced that Martinez has been charged with murder, as well as felony hit-and-run resulting in a death, and a misdemeanor count of driving with a suspended license because of a prior DUI conviction.

Martinez and Jelmert were both traveling northbound on Crystal Springs Road around 3:45 p.m., when the suspect attempted to pass another car at a high rate of speed and collided with Jelmert, said investigator Gabriela Diaz, with the Los Angeles Police Department’s Central Traffic Division. Martinez continued driving, struck a curb and crashed, Diaz said. He abandoned his BMW sedan and ran down an embankment to a trail, police said. Hikers alerted park rangers to his location and he was taken into custody.

“He was under the influence of alcohol,” investigator Diaz said.

Jelmert, a resident of Los Angeles, worked as a realtor for Deasy Penner Podley’s office in Silver Lake-Echo Park. He and his partner Andre Goeritz have been married since 2008 and had been together for nearly 30 years. They both planned to ride in the upcoming AIDS/LifeCycle, which will be held from June 5-11.

“Since the ride began in 1994, we have never experienced a participant’s death caused by a moving vehicle – much less a hit-and-run,” Diaz said.

Damian Kevitt, a cyclist who was struck by a vehicle in Griffith Park in 2013, was severely injured and lost a leg, said he was saddened by the tragedy on April 16. After he recovered, Kevitt started the nonprofit Streets Are For Everyone, or SAFE, an advocacy organization that strives to improve quality of life for pedestrians, bicyclists and drivers by reducing traffic fatalities.

“I am personally in touch with his husband, and I have been speaking to the family as much as I can,” Kevitt said. “This is what happens when you have a lot of cyclists and pedestrians in a park where it is supposed to be safe for them, but clearly it isn’t.”

Kevitt said the tragedy brings renewed attention to making Griffith Park car-free, and he plans to advocate for the concept in the future. SAFE and the Different Spokes Bicycling Club of Southern California also held a vigil on April 20 in commemoration of Jelmert. A riderless bicycle and red roses were placed at the site as a tribute.

SAFE is planning to hold its annual Finish the Ride event on May 1 in Griffith Park. Thousands of people are expected to participate in the event, which includes a 5K/10K run/walk, full-marathon, half-marathon, 12-mile family ride/stroll and 20-mile, 35-mile and 50-mile bike rides. Participants raise funds for SAFE’s initiatives, which include the Yellow Bike Memorial project, which places permanent memorials at the sites of fatal collisions involving cyclists. Kevitt said he is looking into dedicating this year’s Finish the Ride to Jelmert, as well as potentially creating a permanent memorial in the park in his honor.

“Obviously, this hits close to home,” Kevitt added. “SAFE supports Andrew and his husband, who is going through a tough time right now. With [Goeritz’s] blessing, we would like to dedicate the ride in honor of Andrew, and dedicate the ride to a car-free Griffith Park.”

For information on Finish the Ride, visit streetsareforeveryone.org.

Victims robbed after being followed from Beverly Grove

Home on Roxbury Drive should be preserved