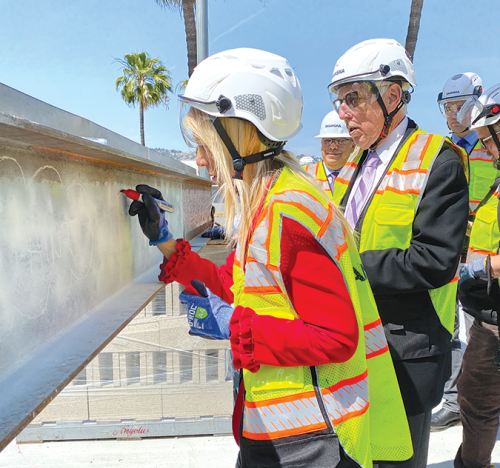 Mayor Lili Bosse and Vice Mayor Julian Gold signed the steel beam prior to it being installed at 9000 Wilshire. (photo by Aaron Blevins)

Representatives of the Swedish development company Skanska and Beverly Hills city officials on April 25 celebrated the “topping off” of 9000 Wilshire, a four-story, 50,000-square-foot office development that should be completed this summer or fall.

Attendees were invited to the fourth floor of the construction project to watch workers install the final steel beam of the structure. Before its installation, participants signed the beam and wrote words of encouragement and praise for the project.

“I wanted to thank you for choosing Beverly Hills for your first building,” Mayor Lili Bosse said. “Beverly Hills welcomes you, and this is the first of many. We want many Skanska buildings.”

She said the community has been through tough times over the past couple of years, so it meant a lot for the city to celebrate the project’s milestone with Skanska representatives in person.

“It’s fitting that we get to do this together,” Bosse added.

According to a press release, 9000 Wilshire has incorporated “intelligent efficiency with a commitment to local and global ecologies.” Designed by Neil M. Denari Architects and HLW, the building will offer flexible floorplates, outdoor work areas, operable windows and views from the rooftop deck. It will also feature bicycle parking, electric vehicle charging stations and public art.

“We value a healthy city, so the fact that you are valuing a healthy building and a healthy work environment – from the outdoor space to the sustainability to the technology – you are visionaries,” Bosse said. “We look forward to partnering with you. We look forward to making this process even easier for you.”

Vice Mayor Julian Gold said the partnership between the city and Skanska has been good thus far.

“We hope that continues,” he said. “We love to see new things like – things that are on the cutting edge or things that are technologically superior. I’m sure this will be beautiful when it’s done. From the city’s point of view, this is exactly what we want to see. And for that, we want to be really good partners to make that happen.”

Councilman John Mirisch noted that 9000 Wilshire isn’t Skanska’s first “foray” into Beverly Hills, as the company is involved with the Purple Line Extension project. He said he was proud of the company’s Swedish roots, as he is a Swedish citizen himself. 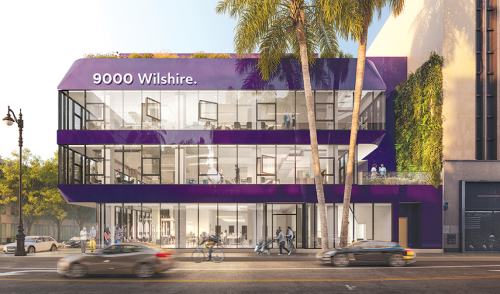 Mirisch referenced a joint venture by IKEA and Skanska called BoKlok, which he said allows for the construction of modular, prefab housing up to five stories. He said the effort results in “wonderful” living spaces at a “great value.”

“If there’s any way that we can help you bring that product to not just Beverly Hills, but to California and the U.S., I know we would love to do that,” Mirisch added. “So, this is a great start.”

City manager George Chavez said he’s spent 25 years on the regulatory side of the construction business, and that he was thoroughly impressed by what Skanska brings to the table.

“I thank you for being so professional and bringing such a quality building to the city,” he said.

“We are excited to have this first project fully exemplify Skanska’s core values,” she said. “This will be the most sustainable office building in Beverly Hills, with a priority placed on the experience of our customers, from both a health and wellness perspective, as well as from a design perspective. We believe that the incorporation of art is integral to the design and also gives something back to the community here in Beverly Hills.”

“It’s affecting hundreds of workers positively every day, and we look forward to turn the building over to the first tenant to let them affect the lives of many more,” he said. “We work with developing, building and delivering sustainable buildings … and I can’t think of anything more sustainable than coming out, having a little fresh air and being able to work outside.”