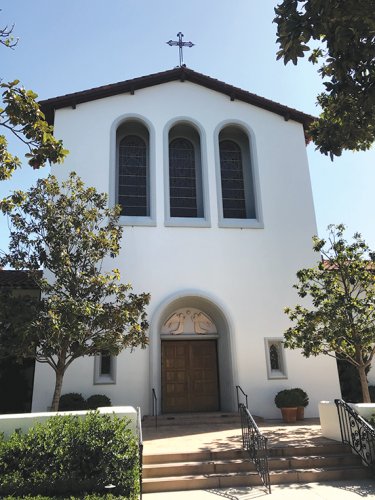 All Saints Episcopal Church in Beverly Hills will hold a benefit concert on May 6 to provide relief for refugees from Ukraine. (photo courtesy of Tim Blair)

All Saints Episcopal Church in Beverly Hills will hold a benefit concert to raise money for Ukrainian refugees on Friday, May 6, at 8 p.m. The church is located at 504 N. Camden Drive in Beverly Hills.

The concert is sponsored by the All Saints Music Guild and will feature selected works by Wolfgang Amadeus Mozart. It will be performed by the All Saints Choir and Orchestra, which has earned international acclaim for its interpretation of classical and Anglican choral music.

“Let us reach out together and provide care for the millions of refugees displaced by this war,” said the Rev. Canon Andrea McMillin, priest in charge at All Saints Episcopal Church in Beverly Hills. “Our concert will help provide basic necessities like shelter, food, blankets, hygiene supplies and money for relocation assistance. The money we raise will support Episcopal Relief and Development, an agency of the national Episcopal Church, which has a network of Eastern Orthodox churches and other faith-based partners with ‘boots on the ground’ in cities in Ukraine, the border countries of Poland, Slovakia, Hungary, Romania [and] Moldova, as well as other countries providing refugee relief.”

The concert will include Mozart’s “Solemn Vespers” and “Coronation Mass.”

“These pieces are some of Mozart’s signature works,” said Canon Dr. Craig Phillips, All Saints’ director of music and organist. “’The Vespers’ was written in 1780, and is comprised of six movements with alternating sections for chorus and soloists. ‘The Mass in C Major,’ was completed in 1779, and is known as the ‘Coronation Mass,’ after becoming the preferred music for royal coronations and services of thanksgiving. This event promises to be an outstanding opportunity to hear and appreciate Mozart’s incredible artistry.”

A contribution of $25 or more per person is requested. All funds will support Ukrainian refugee relief. Contributions will be collected at the door prior to the concert.

All Saints Episcopal Church is one of the oldest churches in Beverly Hills. The congregation began meeting at the Beverly Hills Hotel in 1922. Four years later, a chapel was built at the church’s current location on Camden Drive. It is a parish of the Episcopal Church, the American church within the worldwide Anglican Communion.