A changing of the guard at WeHo Sheriff’s Station 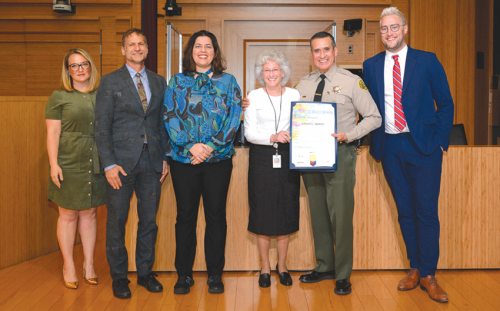 Ramirez led the West Hollywood station since March 2019, and had previous stints there as a watch commander and operations lieutenant. He joined the Los Angeles County Sheriff’s Department in 1990 and has worked in numerous assignments in custody, patrol, administration and the Office of the Sheriff. In his new position as commander, he will oversee the multiple sheriff’s stations including West Hollywood, Malibu/Lost Hills and Santa Clarita Valley.

The West Hollywood City Council presented a proclamation to Ramirez at its meeting on April 4 and thanked him for his service. Ramirez also thanked the council and personnel at the West Hollywood Sheriff’s Station.

“Somebody once told me, ‘Ed, you are doing yourself a disservice by being in the Los Angeles County Sheriff’s Department and not spending any time in the city of West Hollywood. You come out here and it’s going to be a hoot,’ and they were absolutely right. I have had a fantastic time,” Ramirez said. “I would like to say thank you to all of you up here for being good partners, for doing the hard work, and thank you for your friendship. I’m surely going to miss this place, but I will be the commander of the city of West Hollywood, Malibu/Lost Hills and the city of Santa Clarita, so you will be seeing me around, and I’ll be ensuring whoever the next captain is has the resources to continue to provide quality services to the city of West Hollywood.”

The sheriff’s department has named Lt. Bill Moulder as the acting captain of the West Hollywood Station. Moulder, who joined the sheriff’s department in 1991 and has served as a lieutenant at the West Hollywood Station since 2018, said he already works closely with the City Council, city staff and community members. He plans to apply to become the next captain of the station.

“In the interim, I plan to continue the work of Commander Ramirez and his leadership,” Moulder said. “He has done so many positive things for the community. I plan to keep that going.”

The process for selecting a new captain involves interviewing qualified personnel from the department who apply for the position. The sheriff’s department and the city are involved in the vetting process. The city creates a list of recommended candidates and submits it to the sheriff, who makes the final decision. Moulder said there is no set time for the process, but it generally takes several weeks.

“The city of West Hollywood says, ‘This is who we like,’ and the sheriff generally appoints the individual as captain,” he added.

Moulder said he enjoys working in West Hollywood and cited previous positions he held at the station as a deputy, training officer and detective from 2002-06.

“We have definitely had a great partnership with the City Council,” he added. “I look forward to continuing that relationship.”