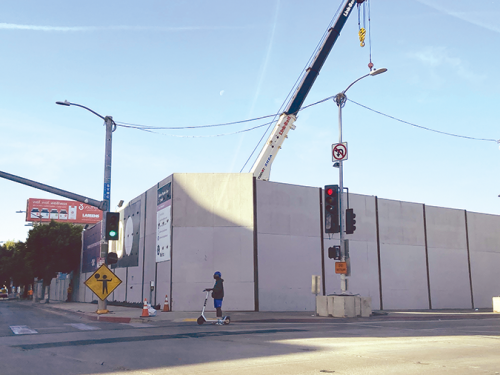 A worker on the Purple Line Extension project was killed on March 23 in what authorities said was an accident at the Metro construction site at Wilshire Boulevard and La Brea Avenue.

Los Angeles Fire Department personnel were called to the scene at 4:52 p.m. and determined the male victim had been struck by a train used to move equipment inside the construction staging area. The victim was pronounced dead at the scene. The Los Angeles County Office of Medical Examiner Coroner said the victim was in his 30s, and his name is being withheld pending notification of next of kin.

The man who was killed was an employee of Skanska-Traylor-Shea, a joint venture contractor that is building the first phase of the Purple Line Extension from Wilshire/Western to Wilshire/La Cienega. Metro spokesman Patrick Chandler said the agency is working with authorities to determine what led to the death but declined to comment further. Chandler provided a statement from CEO Stephanie Wiggins.

“I can’t imagine a job more noble than building a project that will help millions of people get to work, school and countless other important destinations,” Wiggins said. “This is a tragedy beyond words and the entire L.A. Metro family and Metro Board of Directors offers its deepest condolences to the worker’s family, friends and colleagues.”

“A Skanska-Traylor-Shea joint venture team member was fatally struck and killed by a construction locomotive at the Purple Line Extension project site in Los Angeles. We are deeply saddened by the loss of our team member and our thoughts and prayers are with their family at this time,” the statement read. “All work at the project has ceased until further notice. Skanska-Traylor-Shea is cooperating with local authorities and will conduct a full internal investigation. We are also focused on providing support to our team. We want to thank the local authorities for their rapid and professional response.”