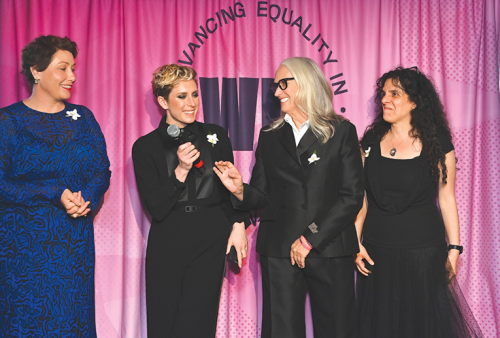 Women In Film, Los Angeles kicked off Oscar weekend March 25 with its cocktail party presented by sponsors Max Mara, Charlotte Tilbury Beauty and Heineken, with additional support from major part­ners IMDbPro and Tequila Don Julio. The party honored all 60 women, in front of and behind the camera, who have been nominated for an Academy Award® this year.

Since 2008, the annual event has celebrated the belief that collabora­tion between women, behind and in front of the camera, is the best way to ensure more films are made by and for women. Co-hosted by Oscar-winning producer and WIF board president Emerita Cathy Schulman and Oscar-winning artist H.E.R., the event was held at Bar Lis at the Thompson Hollywood.

“I’m so grateful for events like this and people like you that really advocate for us women and to me it’s all about the women supporting the women. I always say this – the moment we realize that we are unstoppable together, the stronger we will become,” H.E.R. said dur­ing the event.

“I have never forgotten where I came from, that’s so important to me. It’s not important enough yet in the movie industry, so I have to say that we have a big fight com­ing. We really do. We are seriously underrepresented,” Rita Moreno said.

Writer and illustrators to be honored at gala event