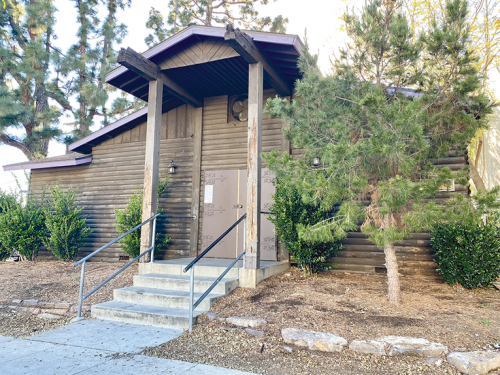 The West Hollywood City Council on March 23 opted to purchase property on Robertson Boulevard that it had leased from the city of Beverly Hills since April 2020. The price tag: more than $5.7 million.

The property, located at 617-621 N. Robertson Blvd., is technically within the city of West Hollywood’s boundaries, but it is owned by Beverly Hills. The city had subleased the property to the West Hollywood Recovery Center for substance abuse services.

“We’re very excited and very pleased,” WHRC president Mark DeRosa said. “This has been going on a long time. The community is very grateful for the historic value of the Log Cabin, which we knew [about]. But, without it, I’m not sure we would have reached this conclusion. So, it’s a good deal.”

The West Hollywood City Council was slated to discuss purchasing the property – known as the Log Cabin – during its meeting on March 21, but members of the council voted to approve the purchase without discussing it.

According to a staff report, both cities agreed on a one-year lease agreement with an option for West Hollywood to purchase the property in April 2020. If West Hollywood exercised the purchase option, the deed would restrict the property’s use to addiction recovery services and a surface parking lot.

In 2016, the city of West Hollywood determined that the site appeared eligible to be added to the National Register of Historic Places – a determination that was confirmed independently, the staff report states.

“At this time, it has the potential to be [registered], but that is actually enough to keep both of the cities from being able to tear it down – in that, they can’t tear it down,” DeRosa said. “The only other thing they would be able to do is move it, which wasn’t feasible, so it saved our butt, so to speak.”

He said WHRC has used the building in “one way or another” since the 1960s or ‘70s, and that the Log Cabin was likely constructed in the 1940s. A branch of Lions Club International operated out of the building for decades until about one year ago, DeRosa said.

“I myself am 31 years sober,” he added. “I’ve been going to meetings there over the course of my sobriety, and it was there long before I was sober. It’s been a place for meetings. It’s well known around the country actually. That’s why this is so important to the sober community.”

The staff report states that the Log Cabin needs renovations, but any construction done to the structure would be subject to the California Environmental Quality Act and would need to meet the U.S. secretary of interior’s standards for historic properties.

DeRosa said the building is in disrepair, as it has not had any work done to it “for a while.” Although there are no current plans to renovate the building, it needs to be brought “up to code,” he said.

“We haven’t quite gotten to the nitty gritty of the plan, but that is the overall plan,” DeRosa added.

He said the city purchasing the property is a “big, big deal” regardless.

“It’s literally a log cabin on Robertson Boulevard, which is really high-tech, expensive restaurants, clothing and art stores,” DeRosa said. “It’s just like this little piece of the woods in the middle of a city, and it’s very, very special.”

What the future holds for the Log Cabin would be a premature discussion, he said. However, in the interim, WHRC will continue to host meetings at the site and provide resources for the sober community.

“It’s been such a long battle to get it to where we are today that I think we need to hold on to this win and kind of revel in it for a while,” DeRosa added.

Gloves come off in mayoral debate