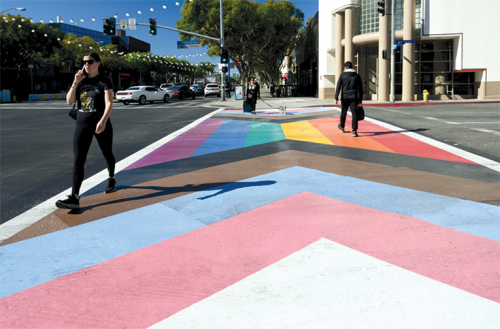 The city of West Hollywood has updated the city’s rainbow cross­walks and incorporated additional inclusivity design elements to rec­ognize the diverse LGBTQ com­munity.

“It’s exciting to see the new pride crosswalks being installed. West Hollywood is a city that welcomes all,” West Hollywood Mayor Lauren Meister said. “My hope is that the crosswalks convey that message and a message of inclu­siveness. Let us not forget that a rainbow is not just six colors or 10 colors – if it truly represents our community, then it is an infinite number of colors.”

First installed in 2012 based on the design of the iconic rainbow flag, the city’s rainbow crosswalks were the world’s first permanent crosswalks of their kind to embody a theme of pride.

The bright red-orange-yellow-green-blue-violet striped cross­walks have garnered worldwide attention and became an iconic symbol of hope, pride and accep­tance for more than a decade, city officials said.

“The new inclusive pride cross­walks demonstrate our city’s com­mitment to recognizing and honor­ing all within our LGBTQ+ com­munity as well as our acknowledge­ment that equity is needed for his­torically marginalized members of our LGBTQ+ community,” Mayor Pro Tempore Sepi Shyne said.

The crosswalks have been installed at the same location – in the heart of the city’s Rainbow District at the intersection of Santa Monica and North San Vicente boulevards. The intersection has served as not only as focal point of LGBTQ community-making, but also as a historic spot for protests and activism, and has been the site of countless actions that embrace the catalyst for progress in the fight for full civil and human rights of LGBTQ people everywhere.

“It’s so great to see this newly painted crosswalk,” Councilman John D’Amico said. “It’s always exciting to see how our city reviews, refines and resets the discussion of acceptance and inclusion.”

Newly updated crosswalk graph­ics feature rainbow flag colors in the center of the crosswalk. The overall design has been expanded with a chevron pattern on both sides featur­ing black and brown stripes to rep­resent LGBTQ people of color, as well as pink, light blue and white to represent transgender people.

“The city of West Hollywood has always been on the forefront of equality, but that doesn’t mean that we’re ever done,” Councilman John Erickson said.

“As our community begins the process of opening back up and we continue to plan our inaugural WeHo Pride 2022 celebration, I’m thrilled that the newly installed inclusive pride crosswalks will wel­come visitors from around the world to the iconic WeHo Rainbow District as a beacon of diversity, inclusion and forward progress,” Councilwoman Lindsey Horvath added.