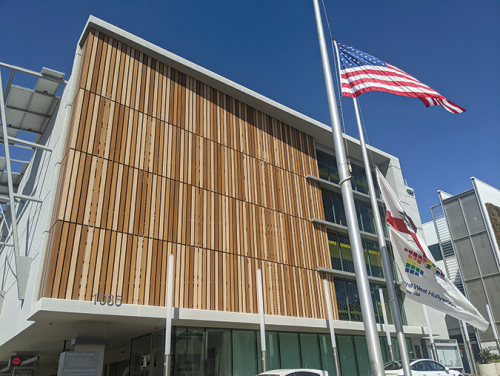 The city of West Hollywood has been considering cutting funding to the Los Angeles County Sheriff’s Department, but no decision was reached at Monday’s city council meeting. At the March 14 public safety commission meeting residents expressed concerns about the proposal, which originated from a recommendation by the commission. With public safety on the agenda, residents expected the city council would move forward with a decision.

Instead, the item was tabled in a 3-2 decision with Councilman John D’Amico and Councilwoman Lindsey Horvath voting no.

City Manager David Wilson said there seemed to be confusion as to what exactly was going to be discussed by the council in the meeting. Wilson explained that the agenda item was supposed to be simply an update on public safety reports.

There were discussions among the council members about whether or not the “clarifications” were in fact inaccuracies in the statistical data of the crime reports. Horvath pressed Wilson on this point during the meeting.

“There are no specific points that are not correct. We’d like to provide more clarification, more context, and have some certainty that all the information is correct before we have public discussion,” Wilson said.

“COVID-19 pandemic-related state and county health orders during 2020 and 2021 created emergency policies that forced certain business closures and safer at home recommendations,” Lunn said. “These emergency policies also had a significant effect on crime. Part one crime incidents in the early part of the pandemic, March 2020 and April 2020, were reported as the lowest in the city’s history. This trend of lower crime continued during the pandemic in 2020 and 2021.

“Not providing context about the impact of the COVID-19 pandemic can be misleading. Using only February 2021 data (105 incidents) presents a sharp deviation from past averages (180 to 220 incidents) and is a bit like comparing apples with oranges,” Lunn added.

Lunn did also note, however, that the February 2022 statistics (249 incidents) did show a rise from pre-2020 numbers.

When reached for comment, Mayor Lauren Meister said she believed tabling the issue was the right move.

“I know the community was disappointed that the public safety update was tabled, but I also didn’t want to hear an item if it wasn’t ready to be heard,” Meister said. “Further, the discussion about our Housing Element took longer than we thought it would, so the public safety item would not have been heard until very late in the evening, and that is also not fair to the public. I assume the item will be brought back in April, when we are back in Council Chambers.”

Meister also came out against cutting funding to the sheriff’s department.

“This is not the time to cut deputies. Public safety must be our top priority,” Meister said.

Both D’Amico and Horvath took issue with tabling the agenda item.

“West Hollywood’s evolving community safety strategy needs a full hearing with discussion of crime trends, policy and safety goals, and program and staffing levels, regardless of what might happen in the near future this will necessarily always be an ongoing developing story,” D’Amico said on Tuesday.

“Public safety is my top priority, as it should be for all local officials.  I’m disappointed that city staff and law enforcement have disseminated conflicting information, which has led to confusion and upset in our community. I’m also disappointed that this conversation was delayed for City Council discussion. We need to take our responsibility seriously, have the tough conversations, and deliver for our residents,” Horvath said.

During the public comment section, many residents voiced their opinions regarding the West Hollywood Public Safety Commission’s proposed budget cuts, as well as the decision to table the discussion.

“The commission recommendation appears to be a political response to a very real issue of concern to residents and businesses alike who are alarmed by the very real increase in crime in West Hollywood,” Leslie Karliss, who serves as the president of the West Hollywood West Residents Association, said.

“I find it extremely frustrating and disappointing that at the 11th hour, you table [the public safety agenda item],” West Hollywood resident Manny Rodriguez said. “City staff has had since [March 17] to make any amendments that they felt needed to be done and correct any errors or add information … it’s very disappointing. And if there’s any discrepancies in the report, that is what you should be discussing.”

Even with the debate over the future sheriff’s department’s funding in West Hollywood, two items related to public safety were moved forward without dissent during the meeting. The first aims to develop a citywide behavioral health crisis response unit, while the second expands the Block by Block Kiosk program. This provides funding for unarmed foot patrols along West Hollywood’s commercial corridors.

The next West Hollywood City Council meeting will take place on April 4 at 6 p.m. More information can be found at weho.org/city-government/city-council.