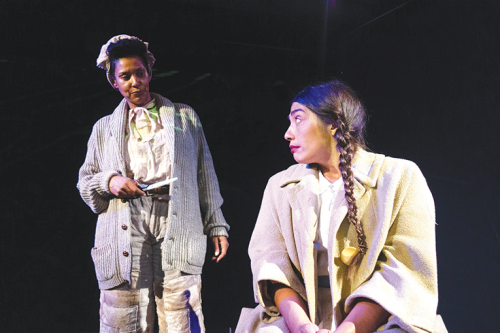 24th Street Theatre, in association with the Wallis Annenberg Center for the Performing Arts, presents a sophisticated re-imagining of a classic fairy tale geared for adults and children alike. Commissioned by 24th Street and written by Olivier Award-winning playwright Mike Kenny (“Walking the Tightrope”), the world premiere of “Rapunzel Alone” is scheduled for a March 5 opening at 24th Street Theatre, followed by seven performances at The Wallis from March 12-19, and a return to the 24th Street venue March 26-April 30. Low-priced previews take place through March 5 at 24th Street Theatre.

Loosely inspired by the famous children’s story, “Rapunzel Alone” centers on Lettie, a young mixedrace girl from London who is sent to the countryside during the daily bombings of World War II. On an isolated country farm, she faces her own battles with a strict new guardian and a very “fowl” goose.

24th Street Theatre initially commissioned “Kenny” in 2019, prepandemic, to adapt the Brothers Grimm classic in response to increasing isolation among teens coming of age in the world of social media. Over the course of the past two years of pandemic, lockdown, social uprising, election, insurrection, climate calamities and war, the play continued to evolve as the world changed.

“The play is about our need for connection,” said 24th Street Theatre artistic director Debbie Devine, who co-directs the production with Jesús Castaños-Chima. “How the consoling power of connection heals the agony of isolation.”

An audio version of the play remains available for listening at soundcloud.com/user978180212/rapunzel-alone. As an adjunct to both the in-person performances and the audio recording, “Lettie’s Journal,” a visual record of the character’s experiences, is available for online viewing and digital download.

Tickets to performances at 24th Street Theatre (except previews) are $24 for adults; $15 for students, seniors and teachers; $10 for audiences under 18; and $2.40 for residents of the theater’s surrounding North University Park neighborhood. Tickets to previews are $5. Tickets to all performances at The Wallis are $25. 24th Street Theatre is located at 1117 W, 24th St. The Wallis is located at 9390 N. Santa Monica Blvd., in Beverly Hills. For reservations and information about performances at both venues, visit 24thstreet.org.