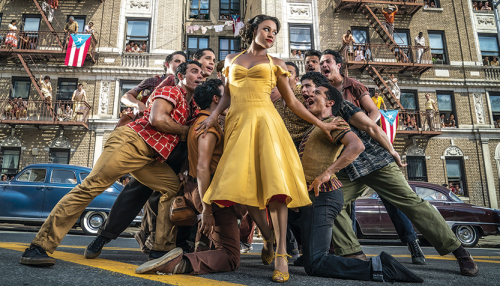 Ariana DeBose is nominated for best supporting actress for her role as Anita in “West Side Story.” (photo courtesy of 20th Century Studios)

Come the 94th Oscars, Academy members will celebrate the best films of 2021 from a slew of choices most moviegoers know little about. Sure, good film criticism supports the cause, helps highlight films folks might not know about, but that has become incredibly difficult lately.

How do you call attention to films popular audiences have minimal resources to actually find? That’s a question that goes unanswered every year, and the Oscars ceremonies’ dwindling viewerships seems to support that.

Academy attempts to resolve this include awarding what some have deemed less important categories like film editing and original score off screen. Another includes a popular movie category voted on by regular audiences. Each tactic, rightfully, has been criticized by folks within and outside the industry.

A knee-jerk reaction would be to miraculously coax Academy members to vote on films everybody else might enjoy, but other award shows already serve that purpose. The Oscars should celebrate what this particular group believes are the best.

In recent years, certain aspects of that aesthetic – if we can call that – have been called out for several biases. (I hold those same concerns and have called them out.) But for now, let’s assume a degree of merit to the argument that industry folks deserve the right to celebrate the films they find most pressing.

To that end, any public event that craves the attention of the masses shouldn’t approach accolades like artists declaring their work entirely personal, made only for themselves. Clearly if that was the case, such films would not require wide distribution. These films should, and often do, resonate, helping us all relate to familiar or unexpected characters or initiate us into entirely unique circumstances.

So the issue is less about choices but access. The public may not need a vote, but plenty of folks probably want to experience these films – even if only the rage against them – and may not have the resources to do so. Consider the frustration of viewing a film trailer featuring an array or concepts or mesmerizing visuals only to learn it will only release in Los Angeles and New York.

Or how about this more common trend. Multiple awards contenders premiere in late December just before the cutoff. The market becomes oversaturated, especially when such films face off against box office juggernauts like “Spider-Man: No Way Home.”

The past two years, in particular, presented a new dilemma. When moviegoers decide to attend a film for the first time in months or years, they face a choice: make the experience count – often meaning choose the epic flick – or chance that more obscure title that likely sounded more appealing pre-pandemic. Escapism and grand stories seem to be winning.

A film like “Drive My Car” is low on the list for Western audiences. Same goes for American flicks like “Nightmare Alley” that deserve attention. At least “Nightmare” quickly arrived on streaming services, but “Drive” didn’t find broader access until the beginning of March on HBO Max.

The latter is even more troubling. This is the first Japanese film in the category – frankly, the best of the bunch – and it didn’t become available for most until a few weeks before the ceremony since most easily missed its November release in choice arthouse theaters.

This is quite common. Tragically, no good recommendation exists at present, only a diagnosis of the problem. The less-popular noms deserve more love, more options for the public to enjoy them or grapple with their complicated themes.

The current plight involves many different players, like theaters vs. streaming, pandemic anxiety, studios’ priorities and public media literacy. To resolve that last one requires some kind of a cultural shift – a push for exposing general audiences to all the ways a certain film ascends through editing, cinematography, score, despite the mere motions of a plotline or quirky performances – a problem not easily solved by a singular award show.

Some things help. Martin Scorsese’s plea to watch “Nightmare Alley,” for one, along with film critics and media reporters who bolster their favorites. Alas, contemporary film criticism carries much less weight than it once did. What critic hasn’t been accused of gatekeeping or trolling by an anonymous digital face?

Solutions vary, but the path to fix the Oscars, make audiences return, isn’t removing categories, insulting viewers with a popular film option or focusing more on who’s wearing who. And the answer definitely isn’t blaming younger generations, like Ridley Scott tried with his rant about young kids and their cellphones.

This problem isn’t unique to theaters or the Academy. Streaming services brag about their heaping film and television libraries, but the number of classics, foreign films and indies is rather light. To all parties involved, heed this: we need more access. That’s the promise of the digital age, and the movies’ longevity resides in responding to that more than adding hard drinks or caramel corn in the lobby.