Take a Culinary Trip to Sardinia at Abernethy’s 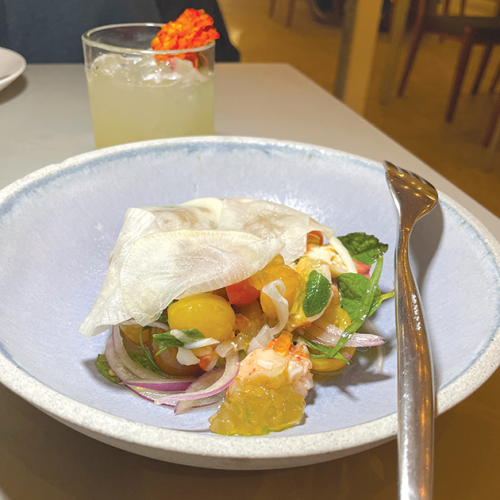 Abernethy’s is a unique culinary incubator where chefs share their story through flavorful fare. (photo by Jill Weinlein)

Abernethy’s re-opened its doors at the Music Center in downtown Los Angeles last week and is continuing its rotating chef concept, inviting selected emerging chefs to showcase cuisine that tells their life stories, and L.A. stories.

Costanza tells the story about his family roots in Sicily, and neighboring regions of Corsica and Sardinia. He curates an array of creative culinary dishes inspired by the Italian islands in the Mediterranean, while using some local ingredients too.

All the details for an enjoyable evening are thoughtfully crafted by Costanza, including a music playlist and array of wines that include some natural varieties to pair with his fare. He tapped muralist Maxwell Sykes, with whom he collaborated previously at the restaurant Freedman’s, to provide artwork.

Sitting on the outdoor patio under heat lamps, we enjoyed the colorful water feature in the center of the Jerry Moss Plaza at the Music Center. The cocktail list is inventive and my husband ordered a Conquistatore made with verde mezcal, vermouth blanco, fresh pineapple and lemon juice, and Calabrian chili infused honey. It tasted similar to a smoky margarita and went nicely with Chef Costanza’s Catalan lobster salad. On top were paper-thin turnip slices covering succulent de-shelled lobster pieces and claws, small yellow, orange and red tomatoes halves, sliced red onion, tomato jelly and chopped basil. The salad was dressed lightly to enhance the sea and earth flavors. Costanza recommends that guest pair the starter with a glass of white Volcanalia Marameo wine made with Garganega grapes.

Next, we selected the chorizo potato fritters, which arrived with three on a plate. Crispy on the outside, the inside was filled with flavorful Spanish chorizo, octopus, lemon zest and waxy potatoes. They are known for low starch, and high moisture and sugar content. In the center of the plate was a circle of slightly airy and foamy white cheese for dipping, and a swirl of bright green salsa verde topped each fritter.

They were as delicious as the sea urchin carbonara. Imagine thick and perfectly cooked long bucatini strands that are tossed in a sea urchin enhanced butter before a generous sprinkle of pecorino cheese is added from the Italian island of Sardinia. The final touch is tender uni on top. While the pasta was buttery with a touch of brininess, it was not overly salty. The creamy texture offered a hint of sweetness and strong ocean minerality in every bite.

I enjoyed this pasta dish with a glass of Au Bon Climat Santa Barbara Chardonnay. The wine also paired nicely with the mussels and clams dish with small pearl shaped fregola pasta in a Vermentino wine and garlic broth. It was served with crispy thin Sicilian flatbread topped with thick yellow saffron rouille sauce.

Who knew that Sardinia is also known for its tempura? Costanza dredges wild Santa Barbara squid, fresh prawns, rockfish, squash blossoms and artichokes in rice flour before deep frying. He also makes a mild saffron mayo for dipping each piece of tempura.

Whole grilled marinated mitake mushrooms with soy glaze and polenta is a fantastic vegetarian dish. It comes with harissa tomato sauce and lovage leaves for a pop of green color.

Before dessert, Costanza came into the dining room to talk with guests. He shared how the menu is reflective of his Italian heritage, even though he grew up in Rochester, New York. He cooked with David Bouley in New York City, and in other Michelin-rated restaurants before moving to L.A. and opening his own dining destinations.

For dessert, we tried two fried seadas pastries filled with Sardinian cheese and topped with a touch of honey and a scoop of vanilla ice cream. Don’t expect a sweet dessert – seadas are uniquely savory Sardinian delights. I thought they would make a wonderful appetizer or even entrée with chef’s lamb ragu.

Oscars recap: This but not that from Netflix