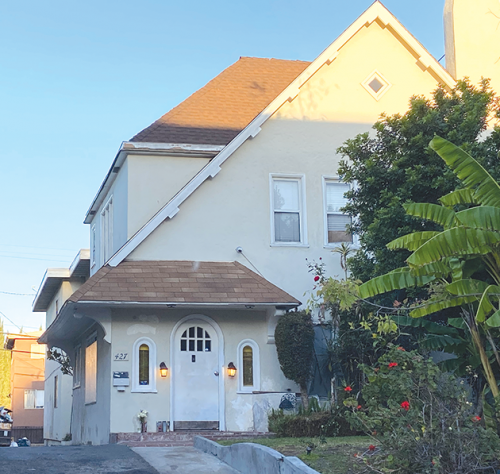 Flowers and candles remain outside the apartment building where a man was shot to death on March 7. (photo by Edwin Folven)

Police arrested an 18-year-old man on March 16 for the murder of a 32-year-old resident in the 400 block of South Gramercy Place. Police described the homicide as gang-related crime.

The suspect was identified as Wilser Virula, 18, of Los Angeles. He is being held on $2.2 million bail pending his next court hearing on April 21.

The homicide occurred at approximately 2:05 p.m. on March 7 inside a unit in an apartment building on Gramercy Place, between Fourth and Fifth streets. The defendant is accused of shooting the victim, Josua Oliva, 32, who lived in the apartment. The motive was a dispute, said Detective Sean Kinchla, with the Los Angeles Police Department’s West Bureau Homicide Unit. The suspect and victim knew each other, he added.

Kinchla did not have information about how investigators identified and located Virula, who was taken into custody at an undisclosed location. Anyone with further information about the shooting is asked to call the West Bureau Homicide Unit at (213)382-9472.