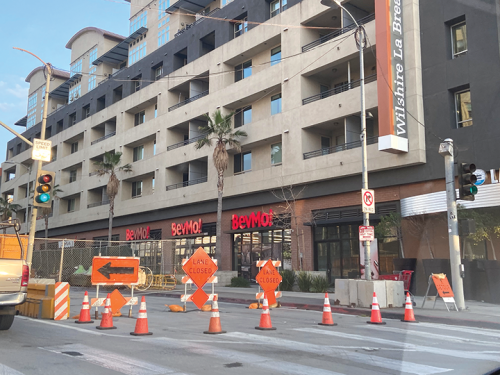 Work continues near a future subway station at Wilshire/La Brea. Street restoration work on Wilshire Boulevard is anticipated to begin in April. (photo by Edwin Folven)

The Los Angeles County Metropolitan Transportation Authority is holding its next lunchtime webinar on sections one and two of the Purple Line Extension subway project on Wednesday, March 9, from noon- 1 p.m., via Zoom.

Information will be provided on the line between Wilshire/Western and Wilshire/La Cienega, as well as the Wilshire/Rodeo and Century City/Constellation subway stations. To join the meeting, visit zoom.us/j/96626476708 and use the webinar ID: 966 2647 6708. The meeting can also be viewed live on Facebook, and audio is available by calling (669)900-9128.

Metro is also advising residents and motorists about work on the Purple Line Extension subway project in March at many locations along Wilshire Boulevard. On section one of the project, work is occurring at the future subway stations at Wilshire/La Brea, Wilshire/Fairfax and Wilshire La Cienega. Construction is ongoing in staging yards on Wilshire Boulevard at La Brea Avenue. Wilshire Boulevard will be reduced to two lanes in each direction between Detroit Street and Highland Avenue through April 4. Sycamore Avenue will also be closed immediately south of Wilshire Boulevard.

Metro is planning a major upcoming street restoration project around the Wilshire/La Brea station. Crews will remove decking on Wilshire Boulevard between La Brea and Highland avenues from April 22 through July 11, which will require full weekend closures of Wilshire Boulevard. The work will occur from 9 p.m. on Fridays through 6 a.m. on Mondays, and the street will be restored for weekday commutes. More details about the street restoration process will be released prior to the start of work.

Crews are building passageways and rooms adjacent to the main subway stations at Wilshire/La Brea, Wilshire/Fairfax and Wilshire La Cienega. Work is primarily occurring within construction staging areas, with some construction occurring on nearby city streets. Wilshire Boulevard has been reduced to two lanes in each direction between Ridgely Drive and Curson Avenue to accommodate construction at the Wilshire/Fairfax station and underground cross-passage tunnel work. Through 2024, a K-rail work zone will be located in the middle of Wilshire Boulevard between Courtyard Place and Masselin Avenue. Access to driveways in the closure area will be maintained. A K-rail work zone is also in place near Wilshire/Fairfax to support underground work on the subway station.

Construction is also occurring on phase two of the project at future subway stations at Wilshire/Rodeo and Century City/Constellation. At Wilshire/Rodeo, work will occur through 2024. Lanes on Wilshire Boulevard will be intermittently closed between El Camino and Crescent drives. Geotechnical instruments are also being installed on sidewalks from Century City to La Cienega Boulevard to monitor ground movement, settlement and other geological impacts caused by subway construction.

Farther west, work remains ongoing on section three of the Purple Line Extension project. Piling to create the future subway station at Wilshire/Gayley is ongoing, with excavation, water well installation, dewatering work and street restoration on the north side of Wilshire Boulevard continuing through March 25.

Preparation work is ongoing for another station at the Veterans Administration Hospital campus. Crews are currently relocating underground pipes through April.