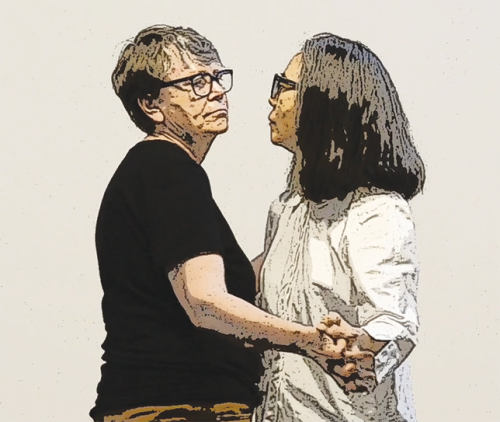 “And Yet,” directed by Lucretia Knapp is one film that will be presented at the Outfest Fusion festivals. (photo courtesy of Outfest)

Outfest, the Los Angeles-based nonprofit organization dedicated to creating visibility for diverse LGBTQIA+ stories and empower­ing tomorrow’s artists and story­tellers, has announced its lineup for the 2022 Outfest Fusion QTBIPOC (Queer, Trans, Black, Indigenous and People of Color) Film Festival, presented by IMDbPro and Hyundai. This year’s festival will feature seven feature films, 52 short films, three episodics, the One-Minute Movie Contest sponsored by Hyundai, as well as workshops and panels. The 10-day festival will be held in-person from April 8 to April 13 and online from April 13 to April 17 and will be open to film­makers and the general public to attend. Visit OutfestFusion.com to purchase tickets.

This year marks for the 40th anniversary for Outfest and the 19th year of Outfest Fusion, which showcases the work of queer and trans filmmakers of color, provid­ing the audiences and storytellers alike with the critical visibility that is needed to build careers, opportu­nities and empathy for our stories. Outfest Fusion celebrates the rich heritage of the individuals that make up the Los Angeles commu­nity while also empowering and investing in their success with edu­cational workshops, masterclasses, networking events and the renowned One-Minute Movie Contest.

“As we find ourselves back in a moment where our rights as LGBTQIA+ people are being taken away and our very existence silenced, we know these moves have a greater impact on LGBTQIA+ communities of color. We have continued to evolve Outfest Fusion in ways we hope empower the next generation of sto­rytellers to reshape their own narra­tive and to drive cultural change, ” Outfest executive director Damien S. Navarro said.

“The programming at Outfest Fusion exists to directly close and challenge the systemic access gap for LGBTQIA+ people of color. With this year’s festival we contin­ue to grow upon that mission, and I’m very excited to work on creat­ing solutions to these systemic problems.” Outfest artisticd Director Faridah Gbadamosi said.

Founded in 2004 amongst a cir­cle of community organizers and Outfest Board Members, the Outfest Fusion QTBIPOC Film Festival is a response to the public and industry need for more inclu­sive spaces where storytellers and filmmakers of color can receive the opportunities and the visibility they struggle to find for themselves and their work. To date, Outfest Fusion has showcased over 10,000 works to nearly 250,000 audience mem­bers and impacted over 2,500 story­tellers and up and coming industry members with its Outfest Fusion workshops, contests, and events.

The complete slate of features and shorts programming at the 2022 Outfest Fusion QTBIPOC Film Festival can be found at OutfestFusion.com.