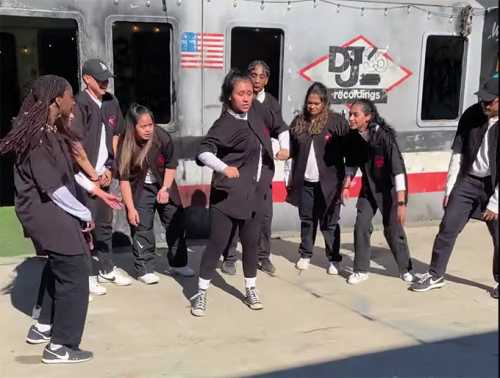 Versa-Style Next Generation will present a tribute to the golden era of hip hop during the online version of Tarfest. (photo courtesy of LAUNCH LA)

LAUNCH LA will present the 19th annual Tarfest music and art festival in a virtual format on Wednesday, March 30, at 7 p.m.

Tarfest traditionally takes place in fall, but pandemic uncertainties and prohibitions on public gatherings prompted LAUNCH LA to pivot to a virtual festival this spring. This year’s celebration will include a 55-minute video with performances by two nonprofit contemporary dance companies, as well as seven diverse musical acts based in Los Angeles. The video will be available for viewing at tarfest.com.

James Panozzo, executive director of LAUNCH LA, said organizers plan to return to an in-person festival in June 2023, when Tarfest celebrates its 20th anniversary. He said it was unfortunate that the COVID-19 pandemic forced a change of plans in 2022, but the online program will still fulfill the festival’s mission of providing exposure for cutting edge dance and musical performers from Los Angeles.

“It’s a great way to reach a lot of people and utilize a different format of presenting the festival,” Panozzo said. “Based on different scheduling, it looks like we are aiming for June of 2023 for our next in-person event.”

The online program will feature Versa-Style Next Generation and Mash Up Dance Company. VSNG represents the diversity and complexity of Los Angeles. It is led by professional dancers Ernesto Galarza and Anthony Berry. Nine male and female dancers will perform “Take It Back,” a tribute to the golden era of hip hop from the 1980s to early 2000s.

Mash Up Dance Company, a nonprofit company dedicated to the movement of female bodies and feminist ideas, will present “EMBODY I in body.” The new piece analyzes the qualities of who and what inspires people. Six women dancers will explore how those elements are exhibited and explored through movement.

The video was produced by Phil Jaurigui and his team at the Den Studios.

“In the final stages of this long pandemic, Tarfest hopes to provide meaningful opportunities to artists along with inspiration and enjoyment to our viewing public,” Panozzo added. “Years of experience and established relationships allowed for this special collaborative effort to occur for the benefit of all who miss music and dance.”