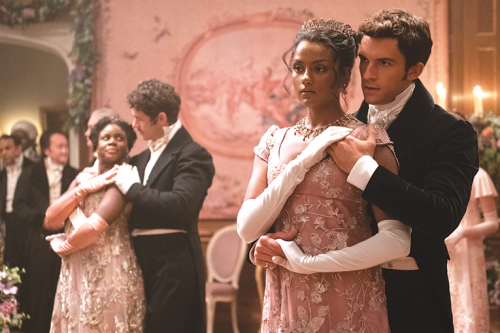 Jonathan Bailey and Simone Ashley are intriguing in the second season of “Bridgerton.” (photo courtesy of Netflix)

As awards season comes to a shocking end, our fine community must endeavor to move forward. But what, pray tell, can compete with the dramatic conclusion to awards season? This humble writer has no choice but to press on, hoping for a delectable distraction in the social seasons afforded by ladies and gentlemen searching for love in “Bridgerton.”

At first, it brimmed with scandal and lavish soirées as the debutantes of the ton – our fair city’s elite – presented themselves for suiters in hopes of expanding family fortunes and, on occasion, finding love. Alas, this season’s offering endures a revision that undoes the enterprise.

Daphne only returns as a source of wisdom for her Bridgerton kin, especially Anthony (Jonathan Bailey), ready to sway a young lady of proper upbringing to ascend as his lordess, the viscountess. The game is afoot, but our previous encounters with Anthony present not an endearing figure but, as the yanks would say, a tool.

Lord Bridgerton’s affinity for personal undoing and devotion to the ton’s hierarchy grew tiresome indeed. Now, the duke departs and spirits away with his charm, leaving the sophomore season to wonder how we might burn for Anthony following so much tedium.

The outcome is perhaps more positive, though this dukeless story is an echo of a once rousing foray. We learn much regarding Anthony’s childhood trauma and burden on the man of the house. The efforts enjoy a degree of success.

And may we not forget the previous season’s major revelation:       the true identity of one                  Lady Whistledown, Penelope Featherington (Nicola Coughlan), a dear friend of the Bridgertons, though her own family all but ignores her. This elusive muckraker continues her work, though we now bear witness to what ton knows not.

She hears all, composes her haughty prose and ventures into city corners unsavory to ensure her words remain the talk of the town. And even though young Penelope sharpens her skills, grows her small business, she still pines for Colin Bridgerton (Luke Newton), whom this author cannot help but find quite beneath her.

The players all understand their roles, though the absence of the duke and duchess casts a long shadow indeed. To date, we now know Anthony better than others. That is a tragedy almost as grave as intermixing fine china with the silverware. Preposterous.

Still, this dukeless “Bridgerton” is hardly undone. For his part, Anthony does transcend some of his more unpleasant mannerisms. Further, Miss Kate proves an adept addition, one quite capable against such an aggressive adversary. 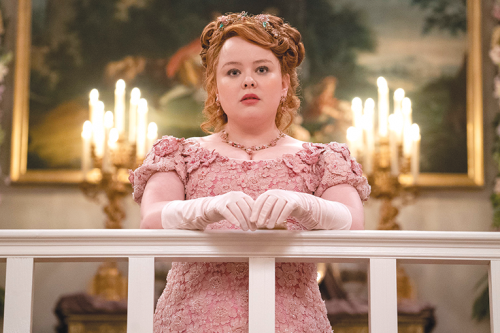 Penelope Featherington (Nicola Coughlan), as Lady Whistledown, is a charming component of the new season. (photo courtesy of Netflix)

Another peculiar choice this season belongs to what goes unseen. Considering all the commotion regarding a certain illicit interlude last year, this telling is rather chaste. Anthony fulfills his carnal appetites routinely with coin. Yet those of his class dares not lure, though one tempts him most, challenges his oath to swear off love.

A mere glance or graze of a hand bares a yearning unknown by most of the ton. Such thoughts alone invite judgment. But if Anthony acts on them outside convention, he might bring shame upon all Bridgertons. This season’s prurient moments rely on innuendo more than overt displays.

This is the same “Bridgerton,” presenting the same feigned features: sartorial delights, lyrical discourse, a fair city embroiled in impropriety. But current charms and new faces cannot replace a once-perfect outing. Until next time, this author hopes “Bridgerton’s” remaining joys, and there are some, will be enough.