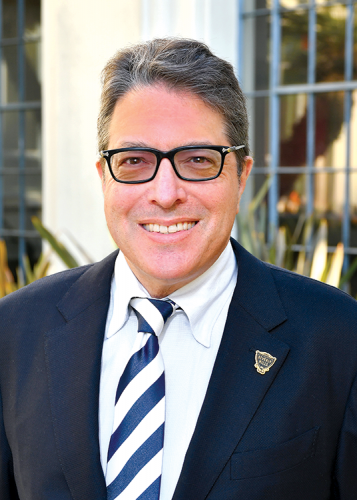 Beverly Hills City Councilman John Mirisch describes himself as a communitarian, and he hopes to continue that approach to his civic duties with another term following the June 7 Primary Election.

Mirisch, Mayor Robert Wunderlich and Councilman Lester Friedman are up for re-election, and their seats are being challenged by eight other individuals who will appear on the ballot.

“I feel that I have a unique voice, and I have a voice that we need to have on the council to put residents first,” Mirisch said. “I feel that I also, as [former] Mayor Charles Aronberg said about me, I bring up issues that nobody else talks about. From my perspective, I think we are facing a time of unprecedented challenges, and most of those are coming from the world around us. I have both the experience and the passion – and hopefully the knowledge – to help guide us through these challenging times and to do so in a way that makes sure our community is protected.”

The councilman said his top three priorities in a new term would be improving public safety, mitigating state land use legislation and promoting fiscal responsibility.

The council has heard several times that the Beverly Hills Police Department needs to hire more officers and increase their compensation, but Mirisch said a “silver bullet mentality” will not work in solving the city’s crime problems.

He said work is underway to bolster the department, but he would like to see more of a presence from officers and private security firms, especially in the Business Triangle. Mirisch would like more foot and bike patrols as well.

Further, he said the department should purchase additional mobile command centers, which are often used in disasters or emergencies, and deploy them “strategically” as needed.

“When we’re faced with challenges … you can deploy that somewhere, and that could be not just a visual deterrent, but it can serve as a sort of mobile substation that police officers on foot patrol can use,” Mirisch said, adding that he would like to see police substations at the future Metro stops as well.

He served on the committee that managed the city’s search for a new police chief and said Chief Mark Stainbrook, who was sworn in at the end of November, was his first choice for the job.

“I think that when you hire a professional who knows a lot more about public safety than you do, you can have a dialogue with them,” Mirisch added. “But, ultimately, you empower them and provide them with all the resources they need to get the job done.”

He would also like the community to be more involved in policing the city – beyond neighborhood watch groups and Just in Case BH. Mirisch referenced citizens academy programs, which give community members training that can be used to complement police departments.

“They won’t do the sorts of things that the police do, because they’re not police. They’re meant to be force multipliers,” he added.

Mirisch said numerous pieces of legislation proposed in Sacramento that strive to increase density in residential communities could have an impact on Beverly Hills in the near future.

“I’m agnostic on density, and some people love living in Manhattan-style accommodations,” he said. “Some people love single-family homes and anything in between. The fact is, in Beverly Hills, 65% of our units are multifamily and 50% of our residents are renters. I just don’t want Sacramento to take one-size-fits-all approaches and to force things down our throats that our residents don’t like.”

Mirisch said Beverly Hills needs to do “certain things” to increase its housing stock, and that he has pushed for affordable housing projects for seniors so they can age in place. However, he said a ballot measure may be the only way to ensure that land-use decisions are made by local elected officials.

As for fiscal responsibility, the councilman said the city’s unfunded liabilities are more than $300 million, and although that figure has “stabilized,” city leaders should continue working to reduce it.

“We need to then work on a sustainable system that is not going to add to that unfunded liability,” Mirisch added.

He said that, in the past, he has advocated for the city to pursue “land banking,” which involves acquiring, holding, managing and possibly redeveloping properties for community benefit, according to Local Housing Solutions.

“If we purchase property, then the city is able to have the sorts of amenities and businesses there that a for-profit landlord may not want to have,” Mirisch said.

Furthermore, he would like to continue promoting transparency and the city’s arts and culture. And he would also like to see the city’s southeast side developed into a “vibrant” arts and theater district.

Mirisch, a fourth generation Beverly Hills resident, was elected to the council in 2009 and has served as mayor three times.

“You may not always agree with me, but you will always know where I stand and why,” he added. “There are not ulterior motives, no hidden agendas and no nonsense, and that’s something that people can always count on from me … going forward.”