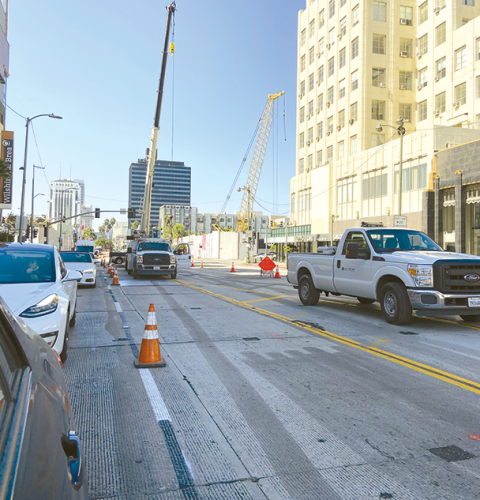 Metro is planning to remove decking on Wilshire Boulevard between La Brea and Highland avenues from April through July. The work will require full street closures during weekends. (photo by Edwin Folven)

Crews will remove decking on Wilshire Boulevard between La Brea and Highland avenues from April 22 through July 11, which will require full weekend closures of Wilshire Boulevard. The work will occur from 9 p.m. on Fridays through 6 a.m. on Mondays, and the street will be restored for weekday commutes.

Metro is also advising about construction on the Purple Line Extension project that will impact traffic along Wilshire Boulevard in Westwood. Crews will be reconfiguring traffic lanes from 9 p.m. on Friday, March 11, through 6 a.m. on Monday, March 14, as part of piling work for the future Westwood/UCLA subway station. Pile installation on Wilshire Boulevard between Veteran Avenue and Westwood Boulevard will move to the middle of the street. Wilshire Boulevard will be re-striped, and concrete K-rail barriers will be placed along the border of the work zone to protect the public.

The work will require traffic to be reduced to one lane in each direction on Wilshire Boulevard between Westwood Boulevard and Veteran Avenue. Traffic control officers will be deployed to mitigate impacts during the initial phase of the traffic flow reconfiguration. The construction will occur through May 14 and notices will be updated online each week at metro.net/projects/westside.

Work is occurring at many other places along the subway project on Wilshire Boulevard. In Beverly Hills, crews are working on the future Wilshire/Rodeo and Wilshire/La Cienega subway stations. At Wilshire/Rodeo, the current phase of station construction will occur through 2024. Lanes on Wilshire Boulevard will be intermittently closed between El Camino and Crescent drives. Geotechnical instruments are also being installed on sidewalks from Century City to La Cienega Boulevard to monitor ground movement, settlement and other geological impacts.