Lunch is back at Yardbird 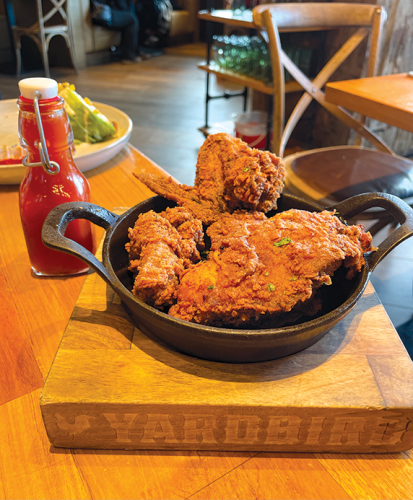 The fried chicken is crispy and delicious at Yardbird. (photo by Jill Weinlein)

I recently invited a friend to join me at Yardbird Table & Bar at the Beverly Center. When this Southern-themed restaurant opened at the corner of La Cienega and Third in 2018, Angelenos enjoyed the experiential dinner menu with big and bold culinary presentations. I was curious to see if their lunch menu offers the same interesting dining with delicious new twists on Southern comfort food.

Yardbird is a colloquialism for a domestic chicken, and as its name suggests, fried chicken is one of the main attractions. They serve crispy white and dark meat chicken stacked in a wire basket with a chicken design on a blue farmhouse platter. The chicken is made in a 27-hour process of coating, brining and dredging in Grandma Lewellyn’s secret herbs and spices before going in the fryer. Lewellyn is Yardbird owner John Kunkel’s grandmother, and her recipe calls for a little paprika to enhance the chicken’s appealing golden sunset color.

We started with Yardbird’s country buttermilk biscuits served warm wrapped in a cotton dish towel. The kitchen bakes biscuits every hour and tops them with a glaze of honey butter. Cut a warm biscuit in half and spread creamy honey butter and exquisite apple butter jam in the center before taking a bite.

Dining in Los Angeles, you never know who you might see, and when the friendly host seated actor Leslie Jordan (“American Horror Story,” “Will & Grace,” “Hearts Afire”) across from us, I couldn’t help but notice. I watched as he greeted his server and placed his order with an infectious smile. He sipped sweet, iced tea while reading the New York Times and enjoying a plate of deviled eggs. The eggs at Yardbird are uniquely tall, with two-inch swirls of bright yellow yolk inside each halved egg.

My attention was brought back to our table when the lobster mac and cheese arrived. On a black skillet was a whole one-pound lobster with claws and tail on full display above ever so cheesy and creamy pasta. It’s one of the many show-stopping photo-worthy dishes at Yardbird.

The fried chicken, crispy on the outside and so tender inside, is served with a bottle of honey hot sauce to give the chicken a kick.

When we finished lunch, our server Christian recommended the lemon cheesecake for dessert. When he delivered it, the plate had two bright yellow lemons with a scoop of raspberry gelato in the center. Underneath was a granola crumble with pistachios. Christian told us to take a spoon and tap the lemons to crack the hard white chocolate shell and scoop the soft cheesecake custard inside. The pastry chef should win an award for how realistic the lemons look, even down to the texture of the rind. It was the most visually appealing and delicious deconstructed lemon cheesecake I have ever seen or tasted. 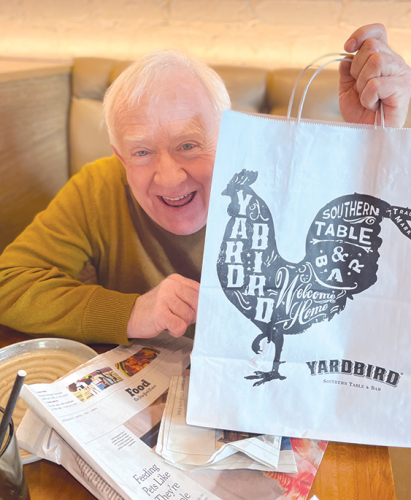 You never know who you might see at Yardbird. Actor Leslie Jordan said the restaurant makes fried chicken like he enjoyed growing up in Tennessee. (photo by Jill Weinlein)

One our way out, my friend wanted to stop by Mr. Jordan’s table to tell him how much she enjoys following his social media account @TheLeslieJordan. He was touched that she recognized him and said, “Ladies, let’s take a photo together.” Standing between us, he said he thinks Yardbird makes the best fried chicken.

“It’s food I grew up eating in Chattanooga, Tennessee,” he added.

When my friend told him that I write for the Beverly Press, he said that he lives in our readership area, gets the paper every Thursday and enjoys reading it.

Yardbird is one of those restaurants that appeals and awakens all of your senses. Its fun and creatively presented fare tastes as good as it looks. $$ 8500 Beverly Blvd. (323)250-8034.

Who deserves top honor at the Oscars?