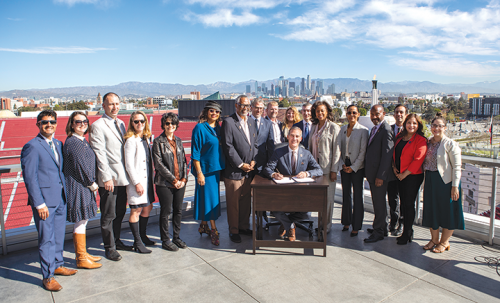 Los Angeles Mayor Eric Garcetti, joined by city officials and representatives of the 2028 Olympic and Paralympic Games, signed an executive order that will help the city prepare for the games. (photo courtesy of Mayor Eric Garcetti’s office)

Los Angeles Mayor Eric Garcetti signed an executive directive on Feb. 28 to establish a Games Cabinet, facilitate the coordination of city departments and key stakeholders, and ensure that all Angelenos enjoy the benefits of hosting the Olympic Games in 2028.

“The 2028 Olympic and Paralympic Games are not only an extraordinary opportunity to welcome the world to Los Angeles, but a chance to build greater equity and prosperity for all Angelenos, now and for long after the Olympic torch has been passed,” Garcetti said. “[Executive directive 28] will help us to coordinate our preparations for this international event and ensure that L.A.’s core values drive all of our planning for 2028 and beyond.”

The mayor’s 2028 Games Cabinet will be led by the chief administrative officer and the deputy mayor of international affairs, in close collaboration with LA28, the City Council and the general managers of city departments.

Los Angeles was named the host city for the 2028 Olympic and Paralympic Games in late 2017. Garcetti secured a commitment of $160 million from the LA28 Olympic and Paralympic Games and the International Olympic Committee to make sports more accessible to children across Los Angeles ahead of the 2028 Games. PlayLA, which provides affordable and accessible sports programming to young Angelenos of all abilities, was launched in 2021 following two successful SwimLA pilot projects.