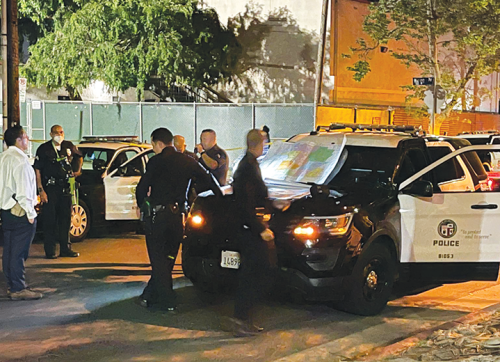 Officers established a perimeter and searched for the shooting suspect, who was not located and is still being sought by police. (photo courtesy of Melrose Action)

Detectives with the Los Angeles Police Department’s Wilshire Division are seeking the public’s help in locating a male suspect who physically beat a dog on March 21 and shot an individual who witnessed the crime.

The incident occurred at approximately 7:30 p.m. in 700 block of North La Brea Avenue, near the intersection of Willoughby Avenue. Two witnesses were walking by an apartment complex on La Brea Avenue when they observed the suspect on an apartment balcony physically beating a dog. The witnesses yelled at the suspect to stop and let the dog go free, police said. The suspect yelled back, pulled out a gun and fired at the witnesses. One of the witnesses was shot once, was transported to Cedars-Sinai Medical Center and is in stable condition.

Witnesses reported seeing the suspect running away from the apartment complex. Police contacted the resident and determined the gunman was a boyfriend of the occupant.

Anyone with information is urged to call detectives with the Wilshire Division’s Major Assault Crimes unit at (213)922-8205. During weekends and off-hours, call the LAPD’s hotline at (877)LAPD247.